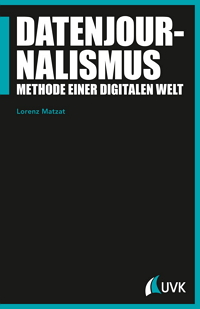 What does the future hold? Academic writing about journalism in the digital age often contains a remarkably similar range of terms: cross-media, communities and data-driven journalism. Each of these approaches is essentially a method of using the internet as a platform for generating attention in the short term and profit in the long term. But before profit comes hard work, as Lorenz Matzat hopes to show using examples in his book Datenjournalismus. Methode einer digitalen Welt, published by UVK in the Praktischer Journalismus series.

Lorenz Matzat will be a familiar name to those who follow developments in digital journalism. He is co-founder of the agency OpenDataCity, which works with media houses to implement data-driven journalism projects. One example is “Verräterisches Handy” [The treacherous mobile phone], an analysis of Deutsche Telekom’s data retention on the Green Party politician Malte Spitz for Zeit Online. This work won the project partners the Grimme Online Award, the Lead Award and the American Online News Association Award in 2011. In 2013, Matzat left OpenDataCity to concentrate on his software company Lokaler, which develops location-based services. He also maintains a blog on datenjournalist.de about data-driven and interactive journalism.

Talking of interactivity, the greatest advantage of a blog over printed media is the opportunity to include links to courses or additional information. In his book on data-driven journalism, Matzat attempts to bridge the divide between print journalism and the world wide web. Counting just under 100 pages, the book is limited to the key points of data-driven journalism: A brief introduction (p. 7-13) is followed by sections on the basics of data-driven journalism (o. 15-33), methods (p. 35-65) and publication (p. 67-92). Since Matzat also includes 64 links to essays, examples, tools and datasets that can be accessed on his website it makes sense to read the book while sitting at a computer.

In his blog , Lorenz Matzat states that his book is aimed at beginners looking for a place to start. He thus begins with a page of introduction, two pages of definitions and a brief historical overview. Unusually brief perhaps, but those who read his blog will know that Matzat is a man of few words – his explanation of how he views data-driven journalism as a method also takes just a handful of sentences. In his view, the dataset is at the heart of journalistic interest (p. 9). The role of data-driven journalists is two-fold: working with the data (recording, sanitizing and researching) and journalistic presentation – ideally in the form of an interactive graphic or application (p. 10). After a few definitions, the structure of the rest of the book also builds on this logic.

Matzat then asks a rhetorical question: Does a journalist who works with data need to learn how to program (p. 31)? His answer is a resounding ‘no’, as data-driven journalism demands team work and specialization (p. 31). But a common language is still needed if this team is to be able to communicate when working on a project. Here, too, the author focuses on the key points: Data is ultimately anything that can be measured or counted (p.17); structure comes from the interpretation of quantitative data using statistical methods (p.18-20); and the amount of information statistics provide depends on why they are used and how they are presented (p. 27-30).

The most useful chapter for those new to data-driven journalism are the explanations of processing (p. 40-65) and presenting data (p. 68-91). Readers will be hoping for answers to key questions: How do I research my data? Where does my dataset lack coherence? Which methods can I use to present the data? How do I prepare my project for final publication? Matzat does answer these questions, but a list and brief outline of possible solutions and examples is as far as he goes. The way he lists ‘scraping’ as a method of gathering data is one example: Although he describes how a computer program is used to mine data from a website automatically and save it in a machine-readable form (p. 46), he does not illustrate this with a specific case study. Instead, he provides a link to ten files of course material on “Web Scraping Without Programming” by the National Institute for Computer-Assisted Reporting. The reader feels as though he is being sent from pillar to post – and the four-page document contains almost 30 further links. From a didactic point of view, this is a missed opportunity. Instead of merely listing methods and tools, the author could have used a concrete example to explain how to work with and present data, not least in order to demonstrate the amount of labor involved and how it is distributed in a team.

Matzat does not promise “to turn the reader into an expert in data-driven journalism in an instant” (dust cover text). But with this book, his readers are unlikely even to become beginners. The author lists the key principles, steps and techniques of data-driven journalism, but does little more than touch on each point. This approach demands a certain level of prior knowledge on the part of the reader, contradicting his own aims. The layout gives precedence to extensive quotes printed in white capitals on a blue background, some of which take up almost an entire page (p. 41). The print template also fails to take the bleed into account: The side register has been cut off.

Holger Müller (M.A.) is a Research Assistant and Academic Counsellor at Bamberg University’s Institute for Communication Studies, where he also runs the training radio station friedaFM. His teaching and research focuses on practical journalism and journalism research.