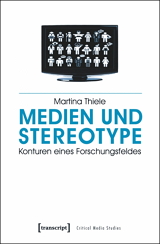 A reviewer wanting to do justice to this postdoctoral thesis should start reading not with the thanks and introduction at the beginning, but with the bibliography from page 397. The table of contents does not show that this annex goes on to page 501 – more than a hundred pages. In providing such an exhaustive list, the Salzburg-based author Martina Thiele gives a magnificent account of herself: impressive knowledge of the literature, a consistent interdisciplinary and transdisciplinary approach, patient research and an almost limitless curiosity about the decades-long process of learning about and documenting publications of all kinds. That is the second, most astounding merit of this work, and one that is almost unparalleled: A long academic continuity has produced research findings on stereotypes in general and their functions in the media that demand syntheses, meta-analyses and the systematic identification of remaining gaps in research. There is no doubt that we have gender research in communication studies– a field to which the author has contributed a great deal – to thank for crucial threads of these findings. It is refreshing that she also recognizes a tendency to self-reference in this, which results in significant gaps in research.

Having completed her doctorate in Göttingen in 2000 and worked in the Department of Communication Studies at Salzburg University since 2003, Martina Thiele submitted this text as her postdoctoral thesis. It cements her position as part of a generation – now finally established in the field – that was genuinely socialized in the field and has made a career of it. Reading this book, which is also exemplary from a design point of view, demonstrates how essential this is for an independent discipline. It is the only way to keep sight of the traditions of the field. Right at the beginning of the book, for example, there is a motto from the influential book by the American journalist Walter Lippmann (1889-1974) from 1922 (Public Opinion, dt. 1964) that was fundamental to stereotype research in communication studies. Colleagues like Gerhard Maletzke (*1922) and Franz Dröge (1937-2002) are also honored as pioneers. The earliest of these memories comes from Franz Adam Löffler (1808-1880), who was using the term stereotypiret, still so relevant today, as far back as 1837. This sensitivity to the history of the field is tangible throughout the work and shapes the well-considered assembly of knowledge, in which numerous illustrations provide additional clarity. Using this approach, Thiele masterfully develops her own understanding of a discipline that has grown up over time. The way she deals with academics that were once influential but have now been forgotten, such as Peter R. Hofstätter (1913-1994), is another fascinating aspect.

In order to organize the wealth of material available, the author chose three large blocks: Terms and theories (p. 23-98), Science and history (p. 99-154) and Meta-analyses and results (p. 155-374). The latter is the most extensive, with each based on two analyses. The first meta-analysis is concerned with the journals Publizistik and Rundfunk und Fernsehen (renamed Medien & Kommunikationswissenschaft) between 1953 and 2011; the second is dedicated to selected publications from a range of disciplines in the German-speaking world. This openness gives rise to the ‘kernel of truth’ debate, for example, which concerns the question of “whether stereotypes do not perhaps contain a ‘kernel of truth’, otherwise they would not be so durable and widely accepted” (p. 56). This must be followed by the question of what this means for journalistic reporting, which relies on stereotypes. So much food for thought is provided on this practical problem that its inclusion in journalistic codes for prevention purposes appears an obvious course of action. There is one significant example of where this kind of scientific knowledge has been successfully transferred into journalism: the program for the advanced training of local journalists led by Dieter Golombek of the German Federal Agency for Civic Education, then still based in Bonn. This initiative has widened its remit over the decades, including setting up the German Prize for Local Journalists, sponsored by the Konrad-Adenauer-Stiftung. For the last ten years, the results of this competition have been published in an annual entitled Rezepte für die Redaktion [Recipes for the editor]. Using the instruments developed by Martina Thiele to analyze this specific, politically-important example would undoubtedly be worthwhile, in order to find out whether this kind of kernel of truth has to exist and how able journalism is to learn. However, the greatest achievement of these two meta-analyses is that the broadest conceivable research returns are amalgamated through generalization. The specific stereotypes examined are nations and ethnicities, religions (with all the terrible consequences such as anti-Semitism), genders, ages and professions. The author weaves these individual analyses into a rich network. What is missing is longitudinal analyses, which do not exist in this field.

Having read this work all the way through, a question that is frowned upon by empiricists is unavoidable: Surely a stereotype – and its relations prejudice, cliché and, widely seen in academic circles, frame – is a universal of human behavior, i.e. an element of a universal grammar of human communication? Human ethology, for example by Irenäus Eibel-Eibesfeldt, does not shy away from looking for such perspectives. Those who are social scientists by trade see these biological ways of thinking and conducting research as separate worlds. Are they right? It can only be hoped that Martina Thiele’s work finds readers who are inspired to address this field of research. It has a great tradition that is worth maintaining, and guarantees that the terrain here is a social and political minefield.

Wolfgang R. Langenbucher, Professor emeritus, worked at the University of Vienna’s Department of Communication from 1984 to 2006. Since then he has mainly produced papers on journalistic topics outside the mainstream, such as on a journalism canon, autobiographies of journalists, or journalism as a cultural contribution. He writes periodically for the journal Message and has written the column Top Ten Buchjournalismus for Der österreichische Journalist since 2015. Focuses of work: journalism research, theory of public broadcasting, communication policy.