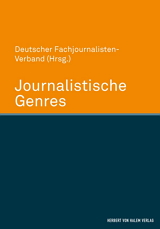 In the German-speaking world, ‘journalistic genre’ refers to the type of text and/or the form of presentation in which a topic is designed in and communicated by the media. News with its originally fixed lead style is a classic example, while reports, reportages and comment pieces have less rigid forms. They are described or even prescribed by introductions to journalism with a linguistic or rhetorical orientation, as either a description or a normative setting: How to write news was long part of the basic curriculum at schools of journalism. In the English-speaking world, on the other hand, the term has a much wider definition, argues Christin Fink in her introduction to this reader: It is almost a general term for the “various methodological and conceptional approaches to journalistic work” (9) and thus something that is entirely new and certainly interesting. In modern media research, these perspectives are largely integrated into the concepts of framing and priming.

The numerous authors in this work provide portraits of 36 of these different attitudes, approaches, methods and concepts of journalistic work. The designations they propose for these are introduced in an unusual way with significant deficiencies. Many of the approaches, intentions and functions also overlap. They are divided into four fields: finding a topic (“Topic and story”), research, “writing and presenting,” and “business models” – although the latter only appears to include non-profit journalism as a separate section. Non-profit journalism is also mentioned as “public/civic journalism”, under “Topic and story”, and as “citizen journalism” under “Writing and presenting.” “Participatory journalism” is also very closely related, while “interactive journalism” focuses on the online contributions of citizens/non-professionals.

It is a similar story with “muckraking,” the sniffing around the ‘swamp’ that journalists did in American cities in the early 20th Century. The practice is considered a precursor of, if not a drastic synonym for, modern investigative journalism. There are therefore justified questions to be asked about why the editors, listed here only as Fachjournalisten-Verband, have taken the differentiation and segmentation to such extremes and what exactly they hope to achieve – especially as they apparently see their main goal as highlighting experimental ways out of what they consider the “crisis of (print) journalism.” Can this crisis really be put down to a problem of genre, even if this is defined here as a journalistic opinion? Or are structural distortions also to blame?

Another factor that cannot be overlooked in today’s journalism crisis is the common phenomenon of “bandwagon journalism,” in which journalists simply reuse large parts of their colleagues’ reporting. Similar developments include “churnalism,” in which research is dispensed with for convenience or due to economic restrictions and existing news simply rehashed instead; “checkbook journalism,” in which informants are paid; and “embedded journalism,” in which journalists are incorporated into the dominant military (propaganda) strategy. All these attitudes and concepts run counter to the noble aims of upright, independent, serious and ultimately ‘objective’ journalism, yet have become common practice and undoubtedly contributed to the current crisis. The first two at least are anything but rare and have become proven business models, so it is difficult to see why they have only been mentioned in the introduction.

It is certainly commendable that the various texts explore and present the overwhelming variety of journalistic approaches around today. However, the individual articles display very different levels of thoroughness and content. In general, they briefly describe the development of the approach in question, highlight its functions and intentions, provide striking examples from various media, and finally argue about future trends and opportunities.

Some articles describe innovations and “crossing of borders” (18) that have occurred and undoubtedly continue to occur in journalism just as frequently as in any other creative process and that are not least due to developments in media technology. As courageously as the authors describe these, they will only be able to help overcome the crisis if these structural questions – such as the 100% private ownership structure of the press, its partial funding through advertising, the apparently unstoppable concentration in the online sector, the neoliberal reluctance to accept state promotion of a cultural asset etc. – are also resolved. Despite this, it will be interesting to see whether and how these broad designations of journalistic genres become established in Germany.