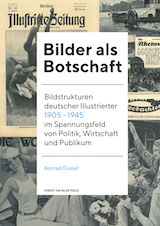 2019 was a great year for literature on the history of press illustrations, the major visual medium that was universally accessible before the age of television. 2019 saw the publication of both the fact-packed »Künstlerlexikon« Bilder in der Presse by art and cultural historian Detlef Lorenz and the present publication by Mannheim historian and media history expert Konrad Dussel. The title of his pioneering work refers to the phrase »the medium is the message«, coined more than 50 years ago by Canadian philosopher and communication theorist Marshall McLuhan.

The object of investigation is »image structures« (as opposed to single images or icons) published as the »actual message« (17) in three ideologically diverse »illustrated magazines«, a press genre that has been neglected in research to date (and whose total circulation in 1929 was estimated to exceed five million copies). Concretely, Konrad Dussel selected three magazines from several relevant titles (cf. 41-45): the left-liberal Berliner Illustri[e]rte Zeitung (BIZ, 1892-1945), which led the market in retail sales thanks to its affordable price; the conservative illustrated journal Die Woche (WO, 1899-1944); and the National Socialist party organ Illustrierter Beobachter (IB, 1926-1945; weekly since October 1928), which were products of the large publishers Ullstein/Deutscher Verlag (Berlin), Scherl/Hugenberg (Berlin) and Franz Eher Nachf. Verlag (Munich, NSDAP).

During the four-decade period under investigation, which is divided into seven sections – the pre-war Kaiserreich; World War I; the early, middle (the »Golden years«) and late phases of the Weimar Republic; pre-war Nazi Germany; and World War II – an estimated 250,000 images were published in the above-mentioned illustrated magazines. Given the time span and abundance of the material, the only possible method of content analysis was a systematic »random sample« carried out by a team of coders, who analyzed sets of three consecutive issues from mid-February to early March and from mid-September to early October of each year, supplemented by a cursory review of all issues and qualifying reviews of some individual items. The team empirically identified 30,068 images (almost 25,000 photographs, drawings, reproductions of paintings, and diagrams) in a total of 587 issues (mainly paper editions, supplemented by microfilms) and interpreted them in their respective »inextricable« textual context (160).

Each detailed analysis is preceded by some media-historically relevant considerations that are helpful for the contemporary reading public. Chapter II thus begins with an overview of publications that can »doubtlessly« be considered illustrated magazines in various German cities during that period. This overview only marginally mentions Germany’s most long-standing publication of this kind, the Illustrirte Zeitung (1843-1944), which was published in Leipzig und no mass-circulation magazine, but remains a source of art and cultural history to this day thanks to the quality of its images.

This is followed by some information on the history and content structure of the three objects under investigation, taking into account their respective political, economic, and journalistic contexts. In Chapter III, readers learn more about the illustrated cover pages, the forms of image representation, image-text relations and image contexts in these »journalistically employed« images. Thus, in particular, the layout of 19th century magazines BIZ and WO, which catered to a »bourgeois« clientele and readership, underwent a major makeover in the second phase of the Weimar Republic, the »era of the great formal experiments« (156).

Chapter IV retraces the identities, and as far as possible, the biographies of the artists behind BIZ, WO, and IB. First, the focus is on press cartoonists, who were often celebrities of sorts, producing »everything from harmless jokes to belligerent war reports«. Here, we should also mention some prominent names that did not appear in the sample, such as George Grosz, Käthe Kollwitz, and Heinrich Zille, who were not only featured in the highly popular illustrated satirical magazines of the time, but also in the BIZ. Thanks to the triumphant advent of snapshot photography and photo reports, the often anonymous photographers became more, albeit not exclusively, important for the the illustrated magazines. Some of them were able to successfully reboot their careers after 1945 (as were, incidentally, also some editors-in-chief).

After this introductory information, the following chapters deal with the »dimension of the entire image space« (270). Chapter V examines the illustration strategies employed by the three magazines with the widely diverging worldviews. Some of these strategies underwent significant changes under a succession of different political regimes. The authors consider three different aspects: political images and their immediate environment (cartoons, social, military and war), followed by »education« and »entertainment«. The first category (containing more than 11,000 images) features a striking number of front pages with political »actors«: Single individuals, such as the heads of state Wilhelm II, Friedrich Ebert, Hindenburg, and Hitler, as well as groups of two or more persons, always directly or indirectly associated with a text (captions, articles).

Chapter VI is interesting for research in several disciplines. It highlights how the dominant images »straddle« the two »major themes« of education/culture (9,244 images) and entertainment (9,523 images). For analysis, the first theme is subdivided into four categories (arts and culture, theater, landscapes and cityscapes, and technology, science, and business). The second theme is subdivided into eleven categories for a better overview: variety, film, fashion, sports, miscellaneous, animals, accident/disaster, crime, and humor, general, and military jokes. Let me just highlight the following result: During the war, from 1939-1945, humoristic and jocular drawings, which had played a minor role in the previous six phases, became »important for the war effort« and ultimately made up more than half to the main theme of »entertainment«.

The book examines other categories such as »non-political«, »educational«, and »entertaining« images with political contexts (for example, anti-Semitism, which initially made up 23.6% of IB content, then dropped to 6.4% by the end of the 1930s, probably with regard to its readership, and even to 5.6% after 1933; cf. 427); furthermore, images with or without people, depictions of named and unnamed men and women, and the Reich, Europe (61%), and the rest of the world with a »new point of fixation«, the USA.

Chapter VII, written by Erfurt communication scientist Patrick Rössler (»The Images and the variety of reporting occasions«), examines the how the same events were covered in the same or similar ways in the magazines studied during a given period. Rössler examines a total of 9,136 reporting occasions for possible photo overlaps in two time periods: until 1926 (IBZ, WO) and from 1927 (BIZ, WO, IB). The result is »as clear as it is unexpected«. Both the BIZ and WO and IB showed high levels of exclusivity and featured relatively few identical or similar images, even after 1933, an era of harshest communication control and influence. Rather, thanks to a »broad variety of motifs«, they provided their respective audiences »each with their own pictorial world« (485 f.).

In his summary, Konrad Dussel revisits his methodological approach, not without addressing, as he had done at various earlier points in the book, the natural limitations of the time-consuming, costly, and labor-intensive sample. On the one hand, this type of content analysis yielded expectable results, but let me expressly emphasize that it also offered quite perplexing insights, especially during the Nazi period.

Finally, I would like to commend the author for not only including, as is usual, the current state of research (note the rich bibliography), but also frequently engages his readers in a game of questions and answers. This imposing work (whose only flaw is the inferior print quality of the illustrations, which are always annotated with great care) is a pleasant read despite its abundance of figures and some redundancies. It can be described as groundbreaking and pioneering, although many questions still remain unanswered, as Konrad Dussel himself concedes. Let’s therefore hope that this media historian’s thought-provoking ideas will find their way into follow-up projects in communication studies or interdisciplinary research, preferably international.

This review first appeared in rezensionen:kommunikation:medien, 2. März 2021, accessible at https://www.rkm-journal.de/archives/22645