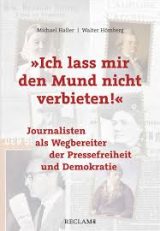 »I never considered freedom of speech […] a blank check to falsify the truth, a way of playing where anyone can say whatever they want, from a position of absolute power and without any regard for facts.« (24) This is not a contemporary admonition from the era of fake news, hate speech, and echo chambers, but the words of English writer and journalist Daniel Defoe. The author of Robinson Crusoe wrote these lines in 1712 during the War of the Spanish Succession (1701-1714) to denounce propaganda lies told by all involved parties.

The ›heroes’ gallery‹ of journalism with its 60 portraits from the 17th to the 20th century offers many such déjà-vus and rediscoveries. Compiled and published by two former journalism lecturers, Haller and Hömberg, the gallery features Johann Gottfried Seume (1763-1810), a »highly educated farmer’s son« (55) from Saxony who travelled half of Europe and all the way to America, chronicling his journeys in meticulously researched travel reports. James Gordon Bennett, founder, publisher and editor-in-chief of the New York Herald, published the first interview in his newspaper in 1836, establishing a new journalistic genre (cf. 81f.). British journalist Harriet Martineau (1802-1876) was one of the first women to make a living by writing regular articles (as many as six a week) for the London Daily News and, along with other women pioneers, even captured the attention of Queen Victoria. In the 1880s, English journalist William Thomas Stead invented the concept of undercover research as he set out to expose child prostitution, which was rampant in London; a decade later in the US, journalist Nellie Bly engaged in dangerous role-play to gain access to a mental institution, thus becoming the first female undercover reporter.

Another rediscovery is American Samuel S. McClure, publisher of the reform-oriented magazine McClure’s, who also engaged the services of women journalists like Ida M. Tarbell. He financed elaborate research and thus laid the groundwork for the »muckraking« period, which served as a model and inspiration for newly emerging US magazines from the turn of the century until the World War I. In the Twenties and Thirties of the 20th century, Viennese journalist Max Winter ventured into his city’s slums disguised as a homeless man, founding creating the genre of social reportage with his approximately 1,500 meticulously researched reports. In Berlin, social reporter Maria Leitner successfully conducted similar undercover research in different milieus, publishing her findings in the evening newspaper Tempo in 1928/29.

Photographer Gerda Taro and her partner Robert Capa documented life at the frontlines of the Spanish Civil War and died in the line of duty in 1937. Journalist Martha Gellhorn, who was married to Ernest Hemingway, continuously highlighted the perspectives and plight of those affected by the wars of the 20th century (1937-1987), self-mockingly calling herself a war profiteer. In the 1960s, French journalist Jacques Derogy exposed police brutality against Algerians in Paris, introducing Anglo-Saxon-style investigative journalism to the French media.

In addition to these journalistic pioneers, most of whom have either been forgotten or who are remembered differently, the gallery documents prominent events and personalities such as Heinrich Heine, Georg Büchner, Karl Marx, Alexander Herzen, Émile Zola, Joseph Pulitzer, Paul Schlesinger, Egon Erwin Kisch, Carl von Ossietzky, Joseph Roth, Erich Salomon, Marion Dönhoff, Rudolf Augstein, Günter Gaus, and Jürgen Leinemann, to name but a few. In addition, it chronicles landmark developments and incidents and their impact on the history of journalism, such as the triumph of freedom of the press in England, France, and then in Germany in the 17th and 18th centuries, the Dreyfus Affair, French journalism during the Résistance, the »hour zero« after World War II, the row over radio station Nordwestdeutscher Rundfunk in Germany, Watergate, the scandal over German weekly magazine Spiegel, and journalism in the Polish underground. The editors introduce each century with a general as well as a media-historical overview, providing historical context for the contributions that follow. The collection started out with a »highlights« section in Michael Haller’s media magazine Message. About a third of the contributions in the gallery are revised and updated versions of these articles.

Overall, it is an insightful, captivating volume covering almost four centuries of exemplary journalism whose protagonists are all worth remembering and emulating, especially in the current crisis of journalism. A stimulating read that you will want to pick up time and again as a welcome reminder and encouragement. Unfortunately, it is missing some relevant literature references. And it would have been nice to include a ›heroes’ gallery‹ of those journalists who showed less courage and backbone in the face of hostility and adversity, but rather succumbed to their circumstances – their slogan would be: »I’ll keep my mouth shut when and because it is convenient for me.«

This review first appeared in rezensionen:kommunikation:medien, October 26, 2020, accessible at https://www.rkm-journal.de/archives/22252