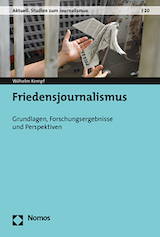 The term »Peace Journalism« first emerged around 1900. Social science has been researching the concept for about 25 years. But what exactly is Peace Journalism? Is it journalism about peace? A normative concept of what constitutes good reporting? Or something else entirely?

As the book shows, there are three very different concepts of Peace Journalism: One of them is Johan Galtung’s model, whose theoretical foundation is news value theory. According to it, news factors such as negativism, personalization, and elite orientation provide a framework that conveys a stereotypical image of conflict. Galtung calls for moving away from these news factors in favor of reporting that is geared towards peace, truth, people, and solutions (cf. Kempf 2021: 102).

The second approach stems from the author himself and is based on social psychological conflict theories. In essence, it is about a gradual de-escalation of our perception of conflict, to which journalists can contribute with their reporting. According to Kempf, it is about asking right questions, which are not »Who is to blame?« and »How can he be stopped?«, but rather »Where does the problem reside?« and »How can it be solved in the common interest?« (Kempf 2021: 108f).

The third (practical) concept by Lynch and McGoldrick (2005) postulates clear requirements for how journalists should report on conflict: »Peace Journalism is when editors and reporters make choices – of what stories to cover, and how to report them – which create opportunities for society at large to consider and value non-violent responses to conflict« (Kempf 2021: 5).

Kempf respects Galtung’s approach, although it differs significantly from his own concept of Peace Journalism, yet he clearly rejects the Lynch/McGoldrick approach because he feels that it does not allow for any claim to journalistic objectivity (cf. Kempf 2021: 105).

Kempf backs up his statements with numerous empirical studies. Real-life reporting on peace processes, he writes, shows that journalists hardly ever follow Galtung’s approach to Peace Journalism. Rather, coverage is clearly dominated by the very news factors that Galtung criticized (cf. Kempf 2021: 131).

While the book is an easy read, it does not feel very coherent, but rather feels like an assortment of the author’s earlier essays and book chapters. For example, his explanations in chapter 3, »Terms and Concepts of Peace Journalism«, would have been a better fit in earlier parts of the book. Unfortunately, the font size in graphs and tables is tiny to the point of illegibility. And in a few passages, Kempf abandons factual-scientific style, e.g. when he writes, »… that propaganda begins to stink« (Kempf 2021: 85).

To Kempf’s great credit, his book assembled and provided a framework to the numerous, rather disparate studies and sources on Peace Journalism. His bibliography includes some 200 other titles on the subject. So far, there seems to be no broad reception of the various concepts of Peace Journalism in practice. This is unfortunate because media play an important role in the perception of conflicts, and thus also in their resolution. Kempf’s work is likely an important element to provide new momentum to the reception of this highly topical subject.

This review first appeared in rezensionen:kommunikation:medien, 14 June 2022, accessible at https://www.rkm-journal.de/archives/23315