Henning Eichler interviewed by Wolfgang Scheidt / Henning Eichler’s latest study, »Journalism in social networks. ARD and ZDF under the spell of the algorithms,« was conducted on behalf of the Otto Brenner Foundation and examines the conflict between public value and platforming. In an interview, its author explains how algorithmic methods of working and platform logics influence journalistic content. Eichler – a radio journalist at Hessischer Rundfunk and Deputy Professor of Media Sciences and Digital Journalism at Hochschule RheinMain – calls for greater transparency from the operators of advertising platforms and a code of digital ethics for social media editorial offices.

by Sabine Schiffer / The Russian army officially marched into Ukraine on February 24, 2022. Since then, a terrible war has played out there in plain sight. A war that is taking place on our own continent, with countless victims, bringing with it war crimes and a wartime economy, destroyed infrastructure, mercenary forces, militias, dead civilians, rape – like any war. Through the media, we see the war in Ukraine in detail and up close – not like any war.

by Mandy Tröger / In his article »How great is the ›misery of the media?‹« Siegfried Weischenberg introduces the term »alternative media criticism« (AMC). However, he neither defines what AMC is supposed to mean, nor does he justify the selection of texts according to which he outlines the concept. The following text is an attempt to clarify the debate.

by Alexis von Mirbach / The feud between Siegfried Weischenberg and Michael Meyen is no secret in the world of communication studies and provides the only logical explanation for the claim that our book Das Elend der Medien [The misery of the media] forms part of a field called alternative media criticism (AMC).

by Mandy Tröger / Building on the paper by Günther and Schultz (2021) »Ten Theses for Strong Journalism in a Digital Media World«, this paper adds an eleventh thesis to the case: Good digital journalism will have to face the issue of new structural dependencies created by tech sponsorship. For when journalism is funded by corporations such as Google or Facebook, digital journalism is subjected to new market and product logics, not least because these corporations provide the digital infrastructures.

by Oliver Günther and Tanjev Schultz / Digitalization is transforming journalistic processes and ways of working. The sector must resist being subjected to the logic of markets and products. Reflecting on the standards and objectives of journalism is vital. In ten propositions, this paper outlines the tension between journalistic autonomy and technological change, calling for confident journalism that trusts both editorial offices and the audience to play a more proactive role.

by Martina Thiele / The author makes a case for a new perspective in the journalistic debate about political correctness and Cancel Culture. Instead of discussing specific terms and language or freedom of expression and censorship in general, we should focus on privilege and power in order to determine who exerts power over our social discourse from which position as well as to expose inconsistencies. For it is mostly those who wield journalistic power who claim to be threatened by speech bans and censorship.

by Ingo von Münch / Much has been written about political correctness (also: Cancel Culture) in many media. Less attention has been paid to the question of whether and why political correctness represents a serious threat to freedom of the press and thus poses a danger to journalism. The following debate contribution answers this question in the affirmative, referencing key aspects such as information bans, topic bans, governmental language regulation, and a trend towards intolerance.

by Gabriele Hooffacker / Today, »alternative media« is used as an umbrella term for a variety of different media products. Some of them simply aim to inject new topics and information into the public discourse of civil society, while others disseminate content that fuels hate against certain groups. 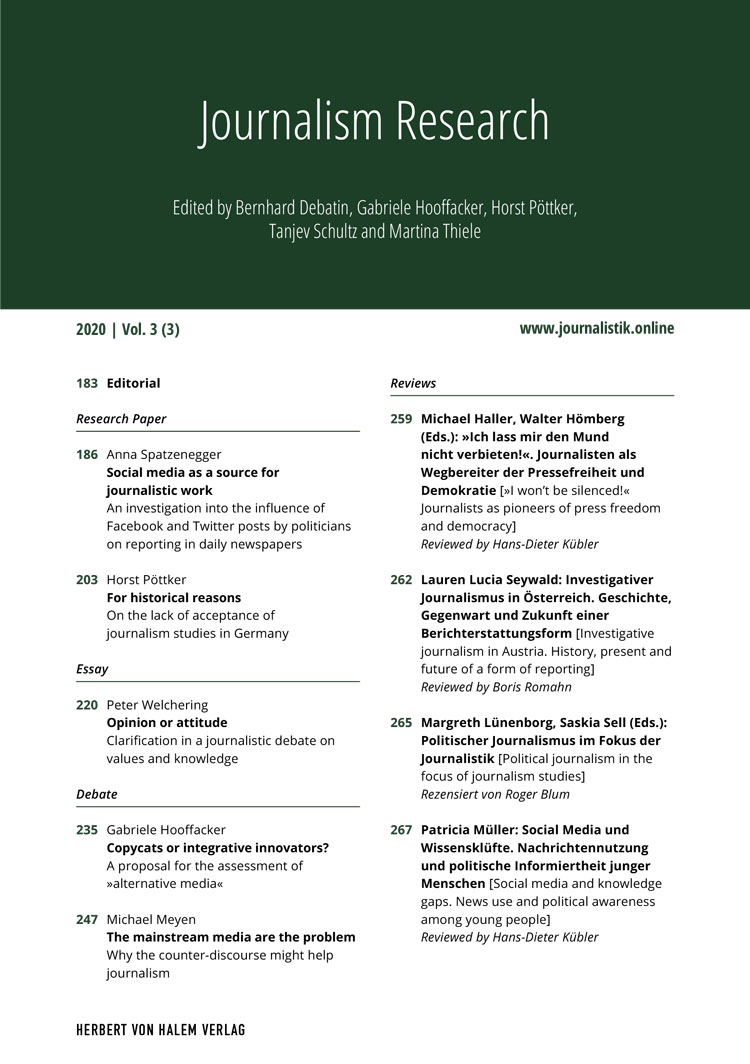