by Carolin Fischer / The number of people fleeing to Europe increased dramatically in 2015. Each day, countless reports on the refugee issue were published prominently on every channel. The media played a crucial role not only in providing information to the insecure public and to policy makers, but also in framing the arrivals. Previous studies have examined the way refugees are depicted in the media discourse of host countries, indicating that media systematically discriminate against these minority groups and deem them as a threat to the majority group. Decisive for this study was the assumption that metaphors – as it often is the case in reporting – must have been part of the media discourse on refugees in 2015. Figurative language types such as metaphor are powerful devices in framing societal issues and shaping public discourse. Based upon Lakoff and Johnson’s Conceptual Metaphor Theory (CMT), and against the background of framing theory, this study explores whether metaphors used in the refugee issue have the power to establish prejudiced opinions towards refugees, depending on their meanings and implications.continue to article

by Siegfried Weischenberg / He has been called one of the greatest Germans of all time, the most important social scientist ever, a significant source of inspiration and irritation in attempts to observe and describe modern society. Even today, exactly 100 years after his death, his works are respected all over the world. In both the USA and China, The Protestant Ethic in particular – a holistic attempt to analyze the driving forces of American society that has never been equaled to this day – has lost none of its influence. Max Weber was a scholar of every field, following meticulous (empirical) studies with profound publications on national economics, legal and religious history, politics, music, the mass media, and much more. Yet the international career of the ›bourgeois Marx‹ did not really begin to take off until after his premature death in 1920.continue to article

By Gerret von Nordheim / Gandhi saw journalism as an irreplaceable means of power in his fight against oppression. As a publisher and deskman, he developed the ethical principles that are presented systematically in this paper. Even today, 150 years after Gandhi’s birth, they still give us cause to reflect. Gandhi’s principles are not those of a journalist who idealizes practice at a hypothetical level, nor those of a theorist guilty of creating an implausible utopia. Instead, they bear witness to a life spent dealing practically with the ethical problems of journalistic work. Given the increasing fragmentation and sense of outrage in today’s society, his publications’ absolute proximity to the reader – in both form and content – and his strict avoidance of unnecessary affectation appear almost prophetic. Other aspects appear stranger: Gandhi rarely reported on political events and rejected both advertising and the exercise of journalism as a profession.

by Julia Lück and Tanjev Schultz / The study explores the work of journalists who were engaged in the Panama and Paradise Papers investigations of the International Consortium of Investigative Journalists (ICIJ), which uncovered dubious financial transactions on a global scale. An online survey was conducted in March 2018 (N = 67). It comprised aspects of working routines, division of labor, personal networks, challenges, and obstacles, as well as assessments concerning journalistic methods and anonymous sources. Quantitative and qualitative answers give descriptive insights into the mechanisms of global investigative data journalism. Despite diverse backgrounds (42 countries, different types of media), the journalists have much in common when it comes to professional norms and working routines. At the same time, the strict rules of the organization and a lack of access to material and knowledge also pose challenges for members of the network.

by Petra Herczeg / Joseph Roth (1894 to 1939) was one of the most significant authors of the 20th Century, familiar to a wide audience with works such as »Job« and »Radetzky March« and through the films of many of his literary works. But he was more than this, leaving behind a comprehensive body of journalistic work. Both his literary and his journalistic work is shaped by precise observations and a sociological look at people and society. This paper analyzes the journalistic work of Joseph Roth, especially his journalistic efforts to counter the rise of National Socialism, and discusses its topicality for journalism today.

by Michael Meyen / This paper investigates the way politics, media practice, and academia interact using the example of journalism studies in the early GDR. How do the social constraints and the requirements of editorial offices influence teaching and research?   continue to article

by Theresa Möckel / For which journalistic situations are stories on social media platforms suitable? What do most young users expect from a story? This paper reveals what stories offer in narrative and journalistic formats. The author analyzed news stories, before creating a sample story, presenting it to a selected target audience, and evaluating it in an online survey. She then used this survey as the basis for a recommendation on how to use stories in journalism. continue to article

by Jonas Schützeneder / Hack or entertainer? Masterly investigation or fearmongering? Tabloid journalism and its actors live by exaggerating content and emotionalizing issues. Although they are regularly criticized for this, their products are consumed by a majority of the population. Much research has been conducted into the balance between information, drama, and entertainment, but the personal perspective of the journalists is frequently neglected. How do the journalists describe their role? A qualitative survey of 14 German journalists shows that tabloid journalism and sensitivity are not mutually exclusive and that digitalization is bringing with it entirely new opportunities and challenges. continue to article

by Swetlana Maschinez/ This study examines the ideological representation of the U.S. Presidential candidates Hillary Clinton and Donald Trump in the editorial sections of the three English-language online newspapers in Russia: Sputnik International, Russia Beyond the Headlines and The Moscow Times. Through Jäger’s framework, van Leeuwen’s model of the social actors’ representation, and van Dijk’s notion of ideological square as powerful tools of enquiry within Critical Discourse Analysis, several tactics could be identified that were applied to influence public’s opinion about the candidates. The results showed that state-owned Russian media outlets made increasingly favorable comments about Donald Trump while consistently ridiculing and offering negative coverage of Hillary Clinton. continue to article 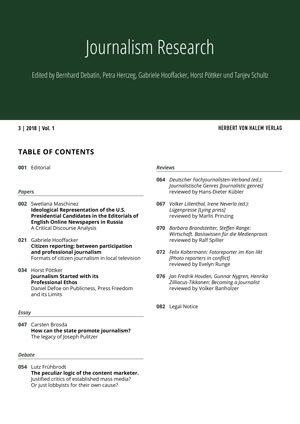