Since well before the COVID-19 pandemic, we have been passionately debating the degree of freedom in our society and what role our media should play. How much criticism is necessary, what kind of criticism is appropriate, what are factors that threaten to restrict our freedom? What forms of »counter-public« exist and what should we make of them?

As always, it is worth looking both to our left and right – at other states and societies – and back at history. In this issue of Journalism Research, we do both. First, we take a look at a region that promises sunshine, glitz, and glamour to those who can afford it, even amidst a global pandemic: Katar, Dubai, Abu Dhabi. However, not only are luxury hotels beckoning travelers, but universities are also brimming with »expats« – not least in media subjects and journalism training. But what are those expats signing up for? Andreas Sträter examines their situation in his essay »Key skill: Reading between the lines«. His interviews with expats reveal how they walk the delicate line between their own culture and local taboos they must not touch. A (powerful) opposition still seems a long way off.

Equally distant to us seems the era that is the focus of Gernot Pürer’s contribution on left-wing extremist magazines in the Federal Republic in the early 1970s. How did the magazines Agit 883, FIZZ and Hochschulkampf respond to the newly emerging »Red Army Faction«? Pürer not only delivers an analysis of the militancy of those days, which is as fascinating as it is unsettling, but also combines it with an instructive account of media-critical discourses. Back then, students were quick to use terms such as »culture industry« or refer to the media as »manipulation machines«, which did not instantly make them terrorists. Today, we no longer express such notions quite so lightly (or carelessly?). Today, those who accuse the press of lying are often not on the left, but on the far right of the political spectrum.

However, the essay by Lukas Franziskus Adolphi shows that meaningful media criticism is still necessary and that such criticism, just like back in 1968 and the following years, should continue to challenge the tabloid BILD: »B(u)ILDING an image of Africa« is a critical discourse analysis of BILD’s coverage of Africa during the pandemic. Adolphi identifies patterns of an »apocalyptic representation« of the continent – dangerous, distorted images that need to be questioned.

Is it possible to report more adequately, more constructively? The approach and movement of Constructive Journalism might offer a means to improve journalism – and not just tabloid journalism. In her essay, Gabriele Hooffacker reports on a teaching project, showing ways to incorporate solution-oriented journalism into education and training. Ideally, it could steer our discussions on social crises in productive directions and point out ways out of such crises, Hooffacker writes.

We would also like to see ways out of our often gridlocked debates about identity politics, gendering, »political correctness«, and an alleged »cancel culture«. Yet before we rush to deny or minimize existing conflicts in our haste to restore harmony, we must first be clear about what these conflicts are. With this in mind, our »Debate« section in this issue offers two very different perspectives on these highly emotive words and the arguments associated with them: Ingo von Münch sees a threat to journalism and freedom of the press in what he perceives as an increasing paternalization of the public, governed by the do’s and don’ts of a »political correctness« that is trapped in a rigid, opinionated ethical framework. Media, he argues, are under a variety of pressures, ranging from »topic bans« and »governmental language regulations« to a general »trend towards intolerance«.

Yes, of course: pressure! After all, power is what this is all about! This is, in a nutshell, Martina Thiele’s response in her debate contribution. Instead of arguing over individual words or having general debates about freedom of speech and censorship, the debate should focus on privilege and power. Perhaps, her article suggests, it is time to rediscover Herbert Marcuse’s essay on »Repressive Tolerance«.

Yet if all this were merely a question of power, both our discourse and this editorial would already be over now, because it would all just be a matter of who prevails in this power struggle. But isn’t there a chance that we can reach at least a partial understanding? As always, we are looking forward to your constructive suggestions and contributions. So join our debate – directly below the articles, the essay, and the debate contributions.

Wishing you a stimulating read, 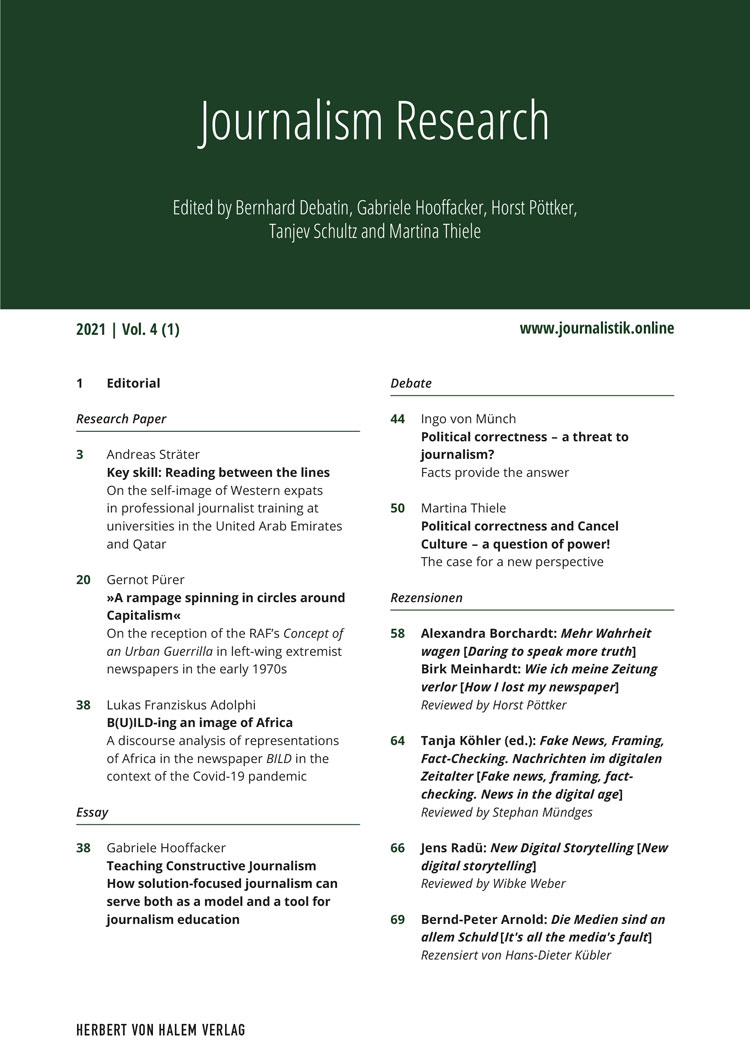