The war in Ukraine continues to hold us in a tight grip, especially all people who are directly impacted by the violence and destruction it brings. The uncertainty how long this war of aggression will be raging, is continuing as well, while other conflicts around the world happen in parallel. As you can read in our statement about the war in Ukraine in issue 1/2022, we are firmly convinced, that, as communication and media studies scholars, we can contribute to public discourse by offering analyses and expertise to support communication for peace. This issue of our journal follows up on this goal with concrete contributions.

Sabine Schiffer sheds a light on the news coverage of the war in Ukraine to date, using the question of how media live up to their task to critically check and contextualize statements and to depict the interests of different actors without becoming participants in war propaganda themselves as an analytical lens. Fittingly, Peter Welchering explicates in-depth the many minute steps that journalists who work on photo forensics take in order to authenticate the veracity of photos coming out of areas of war, for instance from Bucha, a suburb of Kiev. He reminds us not to neglect the education of journalism students and professionals in basic journalistic methodology. In another puzzle piece on the role of journalistic media in times of war, Daria Gordeeva depicts the difficult situation of independent news media and journalists in Russia for whom February 24, 2022 was a caesura, after which the changed situation »made speaking difficult, but silence even more difficult.« Many of these journalists have moved to online outlets or abroad in order to be able to continue their work at all.

From the perspective of communication and media studies, war also puts a special focus on the work of journalists, as the above-mentioned contributions demonstrate. But war also highlights broader and ongoing as well as repeatedly discussed issues in media. How can journalism delimit itself from other sources, information, epistemologies, and, also propaganda? How can news media remain viable amidst times of crises and radical structural breaks? Which aspirations does journalism hold for setting themes and following its own values, for instance working toward the often discussed ideal of neutrality? David Muschenich examines this particular criterion of quality and demarcates it from related concepts by applying sociological approaches to values in order to arrive at a clearer definition of neutrality for future studies.

On the economic, practical level, Eva Brands and Konrad Scherfer take stock of the digital routines of newspaper users and how newspapers strategize to convince readers to pay for articles online in the long run, while still having to master publishing in print and online. Which topics make it into articles in German language news media to begin with – online or in print – is the subject of Hektor Haarkötter’s contribution on agenda cutting and neglected news over the past year, identified by the German sister initiative to the American »Project Censored.« In turn, our new series »Top 10 of book journalism« highlights topics that journalists analyze in book length. In its first installment, Fritz Hausjell und Wolfgang R. Langenbucher, with contributor Maria Beinborn, present review excerpts of books by journalists that were published during the COVID-19 pandemic.

Times of war and crisis also usher in paradigm changes for journalism, as the historical example of a woman journalist demonstrates, who acquired her journalistic skills following World War II. Austrian writer Ingeborg Bachmann’s lesser known journalistic work began with reporting for the broadcaster Rot-Weiß-Rot, run by the American occupying forces in Vienna, and meant for her »learning by doing,« but also brought an openness to experiment with new formats, as Eva Schmidt highlights in this issue.

Apart from many other aspects regarding the role of journalism in times of war and crises, as well as other issues, we also invite analyses and perspectives from and/or including Ukrainian and Russian journalists and scholars as well as journalists and communication and media researchers with Ukrainian or Russian roots. Please submit your manuscripts to: redaktion@journalistik.online 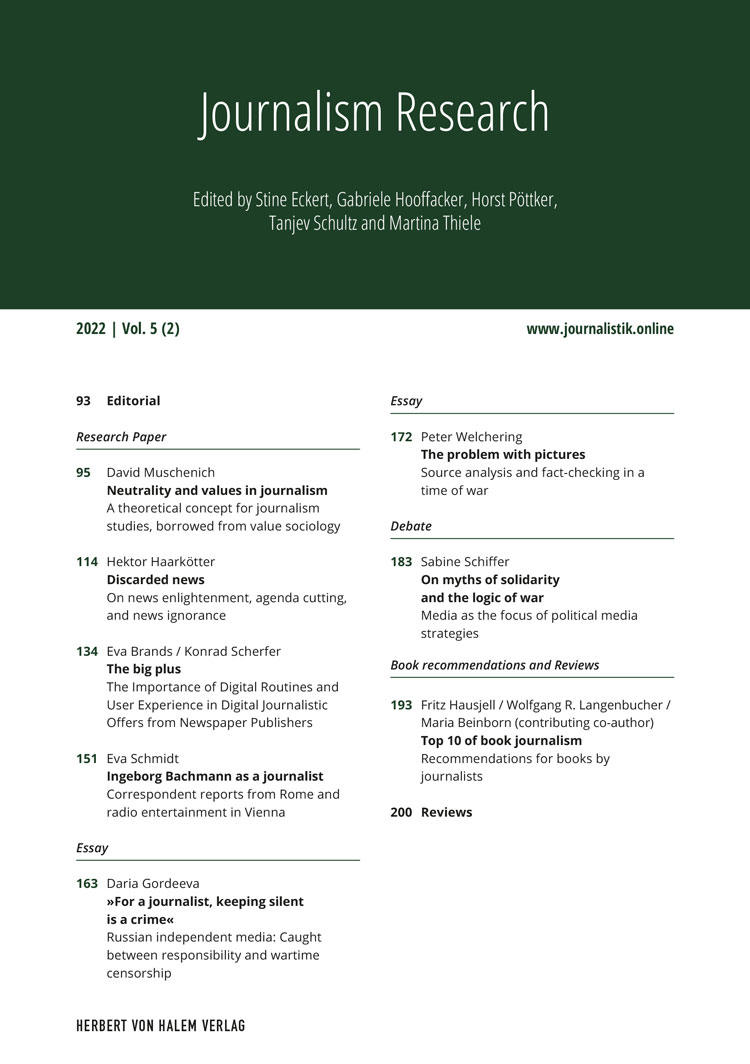