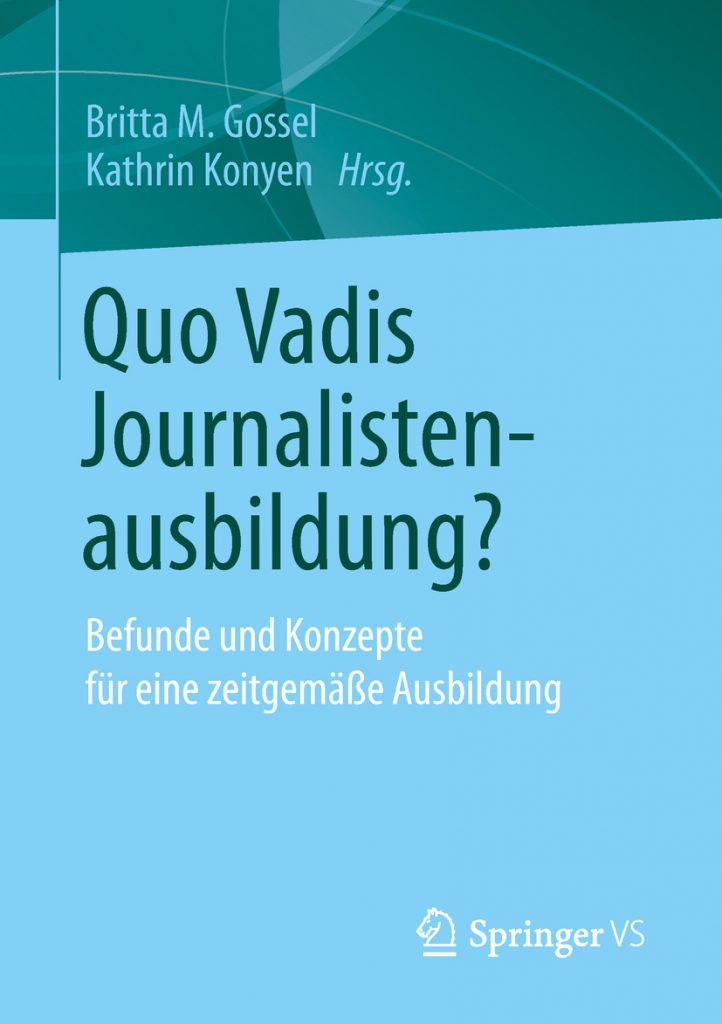 Will the journalists of the future have to be programmers and businesspeople, too? Should we focus on supporting learners’ creativity and developing their personalities? How much teaching time should a lecturer spend on research techniques or writing style? These are the questions currently being considered by many involved in journalist training. Whether the learners are students at university, trainees in editorial offices, or undertaking further training online, they expect to be taught everything they need to know for a career in journalism. What do they want to learn? What should we be teaching them? We need to make a selection from all the skills and abilities we would like to get across.

The editors of the volume »Quo Vadis Journalistenausbildung« and the academics, educators, and practitioners who have contributed to it have recognized the problem. They offer the results of studies, empirical reports, and personal opinions, in varying levels of usefulness. Parts of the study have already been published in a series of discussion papers in the Digitale Bibliothek Thüringen, which also contains more detailed information on the research instrument. This printed volume provides a summary, enhanced with contributions from other authors.

The first almost 70 pages of the 200-page work are taken up with the editors’ description of the online survey they conducted in 2015. In it, they draw on responses from 227 journalists currently in training or with less than ten years of professional experience. The core results are outlined here. The majority of those surveyed found that the extent to which basic skills such as creativity, ability to deal with conflict, conscientiousness etc. are taught is »exactly right.« Specialist skills such as media ethics and media law also received sufficient coverage in the training, they said, although, were the amount to be changed, it should be increased rather than decreased. In contrast, the respondents felt that business skills such as media, cost and quality management could be taught more. However, the analysis of the open responses clearly shows how widely tastes can differ: While one considers the teaching of technical aspects excessive and would like to see broader training, another wants greater depth in specific fields of skill. The editors explain exactly what they mean by »skills« at the start of the chapter. This clearly shows that their survey is dominated by the perspective of media management, as demonstrated by the section of questions on »business-related self-image,« for example – a field that has not been covered in this form in previous surveys of journalists, but is unquestionably justified in an age in which more and more journalists work freelance. Training that focused on the aim of producing »salaried print editors« would undoubtedly disregard the actual figures regarding salaried and freelance journalists. It remains unclear, however, what the respondents who stated »desired career: business« actually had in mind.

Further points of criticism of the study (some of which are also noted by Klaus-Dieter Altmeppen in his paper) include the small sample size and the fact that it only looked at what the (soon-to-be) journalists wanted to see, rather than the skills they actually had. It would also have been useful, even or perhaps especially given the small sample size, to separate some of the findings by the journalists’ position – journalism school / traineeship / editorial office (perhaps further divided by medium) / university. Another improvement would have been to provide a little information on the authors in Part II. It is not clear why the practitioners in that section were selected – although the selection does highlight the different career paths effectively, it seems rather arbitrary in places.

In her opening statement, Beatrice Dernbach gets straight to the point on the advantages of diverse routes into journalism: »There is not just one way – and that is a good thing!« The study shows so many widely differing wishes on content to be taught that it would be impossible to fulfil them all with a single ›ideal‹ curriculum. Agreeing on basic skills is useful, but each educational institution should be free to choose further, more specialized content. The journalistic laboratories at universities (and schools of journalism) can act as the »think tanks of the sector« (p. 77) here. Given the enormous quantity of subject matter that one could teach students, Ramón García-Ziemsen sees just two possible solutions: condensing everything to an extreme degree or making the training longer.

Michael Harnischmacher presents data from international studies and explains differences in the training systems based on historical developments. Klaus-Dieter Altmeppen discusses negative aspects of digitalization, for example the fact that the fall in the number of permanent jobs is causing a decrease in the identity that people associate with specific media. Altmeppen reminds his readers that, even though the trend is moving towards more technical and business-related skills, the core skills that ensure quality in journalism are more important than ever. García-Ziemsen from Deutsche Welle holds a similar view. He lists reliable research skills and the ability to spot relevance as particularly important journalistic abilities and asks, »Perhaps the journalism of the future is at least to some extent the journalism of the past?« This is in stark contrast to Yvonne Malak from private radio, who draws the conclusion that »today’s traineeships should have nothing in common with the traineeships of the last millennium.«

Gudrun Bayer emphasizes the crucial importance of those responsible for training at media houses and how editorial offices can see apprentices as a source of innovation and ideas from outside. Large publishing houses can of course offer training on a very different scale to smaller ones, but both options have their advantages and disadvantages. Like other authors, Stephan Weichert calls on those designing degree programs to constantly reflect on their content and to reorganize and renew it where necessary. Just like editorial offices, training institutions are also »learning organizations« (p. 125). Weichert believes that there is a great deal of work to be done in communicating technical expertise in particular. Nikolaus von der Decken advocates a business-focused, economics-related mindset. He calls for projects to be developed from the broadcaster-recipient perspective (rather than just the broadcaster perspective) and for the costs and potential profits to be included in considerations from the start.

The field of professional journalism has become so diverse that someone who would like to do nothing else but SEO for a large publisher is just as likely to find the perfect position as someone who specializes in test reports on mountain bikes or who is better at programming than writing. Innovation is essential in order to remain fit for the future, but does every journalist have to be able to operate a drone for aerial images? It is good that the volume allows different training providers to have their say, provides new stimulus and relativizes some aspects. It can be recommended to anyone involved in journalist training (as previously stated, regardless of whether at universities, schools of journalism, editorial offices, or anywhere else). The fact that the content of such training is constantly the subject of discussion – not only in this book, but also in papers and sample training curricula from DJV, EJTA, and VOCER, at training conferences offered by the »Initiative Qualität im Journalismus,« and by the ECREA working group »Journalism and Communication Education« – can only be a good thing.

It is also important to note that the study is a collaboration between the University and the Deutscher Journalisten-Verband [German Journalists’ Association, DJV]. Cooperation like this should be much more common, given that it encourages closer discussion between academic study and practice, both of which are actively involved in training journalists. But the study is also four years old. Perhaps it is time to start working on a follow-up.

To finish, a true word from the final chapter of the book, entitled »And now?«: »No serious predictions« can be made today about what the specific requirements on journalism and journalist training will be in ten years’ time (p. 204).

Dr. Liane Rothenberger is a senior academic at the Institute of Media and Communication Science at Ilmenau University of Technology. The focuses of her research include journalism; standards and values in communication science; and crisis communication.