Having paid little attention to local journalism in the past (Arnold/Wagner 2018; Hanusch 2015), journalism research is now taking much more of an interest in the field (see e.g. Gulyas/Baines 2020a: 1; Jenkins 2019; Örnebring et al. 2020). This is linked both to the vital role local journalism plays and to the challenges presented by digitalization and the competition for attention and advertising revenue. Even today, local journalism, and the local press in particular, is extremely important not just to many users, but also to community life in villages and towns, as well as ensuring a diversity of information within the media system as a whole (Arnold/Wagner 2018; Gleich/Puffer 2019; Jenkins 2019; Möhring 2019).

These studies on local journalism focus on investigating news quality, editorial practices and autonomy, journalistic understanding of local journalism’s role, funding options, and what recipients need and expect from their use of the media (Arnold/Wagner 2018; Costera Meijer/Bijleveld 2016; Gulyas/Baines 2020b; Hanusch 2015; Jenkins 2019; Örnebring et al. 2020). Linking these topics, the findings in the book »Den Mächtigen auf die Finger schauen«. Zur Zukunft gedruckter Tageszeitungen in der Region make a valuable contribution to the growing body of research into local journalism.

The publication is based on a case study conducted in summer 2015 as a cooperation between the Pforzheimer Zeitung (PZ) and the Department of Communication Science and Journalism at the University of Hohenheim (Stuttgart). A local newspaper rooted in south-western Germany, the PZ had a circulation of around 36,000 and employed around 40 deskmen in 2015. At the heart of the book is the question: How can the constant fall in sales of local newspapers be turned around, or at least slowed (13)? Identifying the causes is intended as the first step towards developing measures to secure the future of printed local papers. The study thus pursues the normative objective of helping local newspapers like the PZ to achieve success, i.e. improving the journalistic concept of the printed newspaper in such a way that economic profit can be increased (once again) and the connection between the reader and the paper enhanced.

Although the theory section of the work is extensive and well structured, it pays little attention to the findings of international research into local journalism or studies into news quality from the audience’s perspective. It begins by describing how use of the press has changed over the last few decades (cf. 21–41). If one considers readership figures for both print and online editions, the audience is actually paying more attention to local reporting than before. However, this does not translate into profit for publishing houses, as printed newspapers do most of the heavy lifting when it comes to funding local journalism, even as their readership has consistently shrunk over the decades. Younger groups of readers in particular are now almost impossible to reach with printed newspapers.

One of the book’s strengths is that it not only presents these developments as a consequence of the internet’s spread and the media transformation, but instead also examines the »changes in the framework conditions in society« (43–58). The idea that changes in society – such as individualization, changed family and household structures, a change in leisure activities, and disenchantment with politicians – play a role is convincing. However, some of the statements made in this chapter over-generalize, are not backed up with evidence, and contradict the findings of research (cf. e.g. Reuters Institute 2018; Schultz et al. 2020). To quote one example: »The dominant force today is the citizen as a consumer, who takes an interest in public affairs only selectively and where individually affected, takes a distanced or skeptical view of conventional institutions, and displays eclectic information behavior when it comes to news« (53).

The subsequent chapters explain »what makes a daily newspaper in the digital age« (59–73) and the role played by »journalistic services and proximity to readers« (75–86). This section largely emphasizes the local press’ function of providing information, orientation, a forum, and critique; highlights the importance of proximity to readers, everyday references, and audience participation; and poses the question of how important the concept of topical news on a daily basis still is in the context of the digital transformation.

In the empirical study, the central topic of the book – how the future of the printed local newspaper can be secured (cf. 13) – is boiled down to the question of the extent to which the perceptions and expectations of readers and non-readers fit together with the deskmen’s perspective (cf. 90–95). This was achieved by conducting guided interviews with ten deskmen and managers in the PZ editorial office and publishing house, as well as nine guided interviews with PZ readers. These were then used as a basis for developing a representative survey of readers (n=501) and non-readers (n=260) of the PZ. The data analysis is predominantly descriptive; a regression analysis to explain reader satisfaction is not sufficiently presented and shown in tables (150–152).

In the view of the deskmen (97–115), the PZ impresses with strong, careful, and diverse local reporting with original and exclusive stories on local topics and events that are useful, informative, and entertaining. The journalists see themselves particularly as neutral imparters of information and »topic service providers« (99) for the region. They see the PZ as having strong roots in the town and the lives of its readers, and would be able to enhance the diversity of its reporting and its proximity to readers further if deskmen were to go out more to research on the ground and record people’s views. The deskmen also believe that the newspaper is extremely close to decision-makers in politics and business, with some seeing this as an advantage and others as a problem.

The subsequent observations on the readership and its usage, expectations, and assessments (cf. 117–153) show that the printed PZ is used primarily by women and people aged over 50, and that many users read it daily. In contrast, the PZ’s website saw very little use in 2015. As a whole, the readers value the newspaper’s local focus, the quality of its reporting, and the topic weighting, but would like to see even more local stories and information, and a strengthening of independent and critical reporting. In terms of operationalization, it is surprising to learn in this chapter that no reliable measurements from research on audience expectations and perceived news quality were taken (cf. e.g. Costera Meijer/Bijleveld 2016; Heise et al. 2014; Neuberger 2014; van der Wurff/Schoenbach 2014).

The survey of non-readers shows that the PZ is »very familiar [to them] and has a largely positive image as a newspaper for the local area and the region« (176). In addition, some of those surveyed could imagine reading the PZ in future, providing potential for expanding or at least stabilizing its readership. Given the question of how falling circulation of local newspapers can be turned around (cf. 13), however, it would have been interesting to survey those people who have cancelled their subscription or ceased to buy the PZ (see for example Haller 2014: 130). A survey like this could also be conducted later. The PZ’s circulation has continued to fall over the five years since this study was conducted, from around 36,000 copies in 2015 to around 31,000 in 2020 (see https://tinyurl.com/PZ-Auflage).

The book ends with reflections from Thomas Satinsky (cf. 181–192), Executive Publisher of the PZ, and Magnus Schlecht, PZ Chief Editor (cf. 193–202). In their view, the study delivers particular inspiration to expand the PZ’s critical reporting, to boost the local perspective in all reporting, to reflect more of the activities of clubs and societies, to allow more reader participation, to use the online channels more effectively, and to reinforce cross-media work.

All in all, the authors have succeeded in writing a book that can inform actors in journalism, media companies, and media policy on the significance, challenges, and opportunities for development in the local press. It also makes a contribution to research into local journalism and audience expectations. However, this contribution could have been enhanced significantly if the authors had done more to take into account existing (international) research and more complex data analyses.

Jenkins, Joy (2019): Journalism from the peripheries: From the Swiss-Italian media system to other local dimensions. ECREA 2018 special panel report. In: Studies in Communication Sciences (SComS), 19 (2), pp. 227–232. 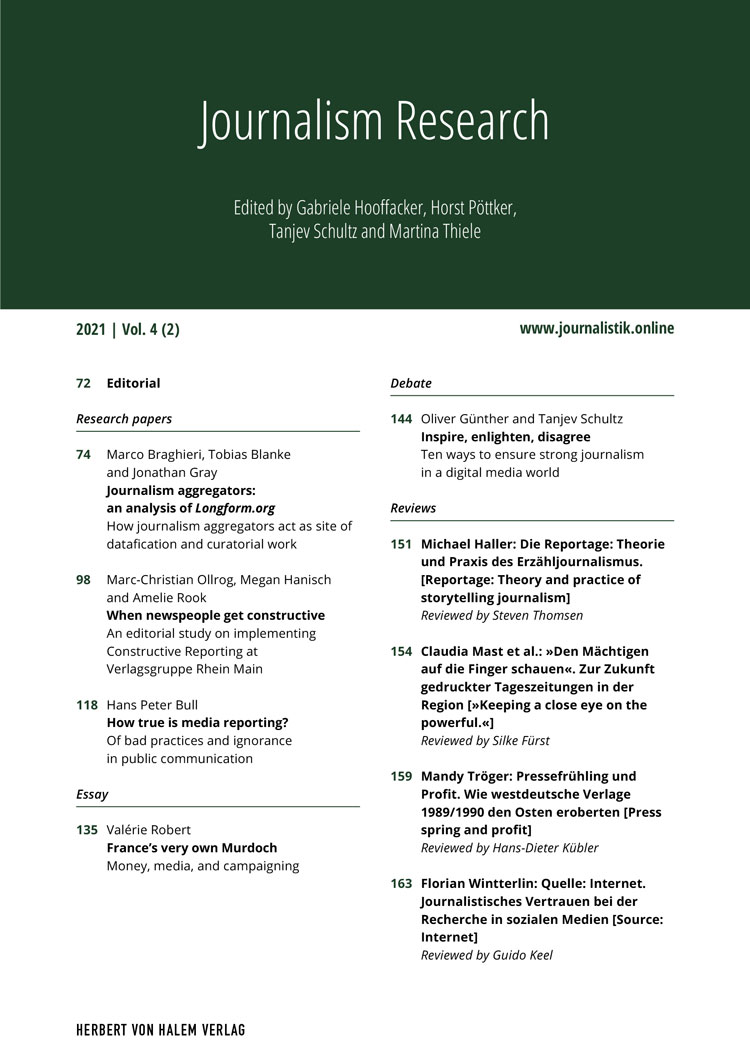