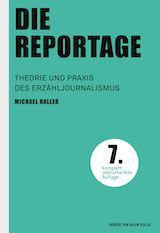 It is more than 30 years since the spirit of this book began its long journey through the institutions. Men and women in print journalism, who were given a copy of Michael Haller’s Die Reportage during their own degree or apprenticeship, are themselves now teaching and researching, leading departments and editorial offices, guiding trainees, or giving advanced training to deskmen and reporters. Just like back then, they too are now incorporating Haller’s textbook into their syllabus and teaching the next generation in the profession to create vivid, informative, subjectively colored reportages with contemporary relevance, based on what they themselves learned from the work first written in 1987.

Now in its seventh edition, the book has adapted to the changes and challenges of time. Michael Haller has revised the text for this edition for the first time since 1995 – and extensively so. He has even worked on the structure of the book, removing an entire section from the previous edition (2008) and adding a new section on the Relotius case.

Written in a deliberately descriptive style, the book is still divided into a historical, theoretical section that maps the development of the modern reportage, and a practical section. Numerous passages have been rewritten and updated, the wording is tighter, and sub-headings have been added to made it easier to read. Typos that were previously copied from one edition to the next have been corrected (although new ones have slipped in). In a negative development for a textbook, the drastically reduced subject index and the patchy index of persons have been combined in a single index. Despite this, Haller’s guide remains a standard reference work on reportage.

With this new edition, the author – who was a Professor of Journalism at the University of Leipzig until his retirement in 2010 – hopes to take into account both the myriad digital possibilities that have become available to journalists for their research over the last two decades, and »the transformation of the political culture. In this, journalism is the subject and the object of the media transformation« (12). However, the main trigger for Haller’s restructuring his book is the Relotius case. He argues that the system of »falsified storytelling« (100) established by the former SPIEGEL deskman Claas Relotius threw the entire sector into a state of shock: »Storytelling journalism fell into crisis« (11). Yet this storytelling is the pinnacle of print journalism. To put it another way, in the words of the great Hans Habe: »Journalists may be craftsmen, reporters are artists« (Habe 1976: 370). Artists like Heine, Kisch, and Roth, whose work placed them over and above objective reporting on day-to-day events.

In this context, Haller also notes that a literary form of reporting has a long tradition in the United States, where it has been spared the constant fight for recognition and acceptance that it faces in Germany. It is no accident that the American professors of literature Robert L. Root and Michael Steinberg called their anthology on »creative nonfiction« The Fourth Genre (1999). They place »creative nonfiction« on the same level as drama, epics, and poetry, making it a fourth main genre of literature.

Since Claas Relotius’ falsifications were uncovered, argues Haller, reportage in German newspapers and has increasingly sunk to a form of presentation dominated by facts rather that perceptions. Yet, he continues, the very purpose of storytelling is »to allow the audience to share in notable observations and experiences on an intellectual and an emotional level« (109). This is achieved by bringing characters to life, visualizing spaces and events, and structuring chronologies for dramatic effect.

By demanding a return to writing as opposed to »superficial fact-quoting« (11), however, Haller also indirectly disputes that storytelling journalism was already in a poor state even before Relotious. The author does correctly state that »[f]acts have been presented incorrectly since journalism began« (97), and mentions that some newspaper publishers were guilty of deliberate deception long before Relotius. But reportage, even in large newspapers and magazines, has had another problem for many decades now: Too often, it is boring. The truly important things that the authors have to say in their texts – the essence of the text that can be boiled down to the core message – is often in no proportion to the length of the article, the storytelling »run-up« taken by the reportage or feature, or the vanity and clumsiness of some reporters. Some key features of this include the following:

Having finished the article, the worst-case scenario for the reader is to feel as though they have wasted their time with trash. This is far removed from what Haller considers successful storytelling, to which he hopes to return. He demands a fine balance between attentive experiences, careful research, and artistic communication. However, this requires extraordinarily talented and carefully trained men and women. Even in its seventh edition, Michael Haller’s book is certainly apt to point talented people like this in the right direction. It is up to them to follow.

Steven Thomsen M. A., born in 1969, has been a freelance journalist and author since the 1990s, publishing articles in newspapers and magazines such as Computerwoche, Die Welt, Management und Training, Westfälische Rundschau, Stuttgarter Zeitung, Darmstädter Echo, Rheinische Post, and Publik-Forum. With a degree in literary studies, he is currently working on a book on the life and work of the American author Norman Mailer, with publication planned for fall 2022.