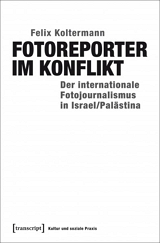 In his dissertation Fotoreporter im Konflikt: Der internationale Fotojournalismus in Israel/Palästina [Photo reporters in conflict: International photojournalism in Israel/Palestine], Felix Koltermann examines the production conditions faced by Israeli, Palestinian and international photojournalists. “As a result of the constitution of the Middle East as a center of news, a separate system of photojournalism, related to the conflict, has developed here. As communicators, photoreporters working there are among the most important journalistic actors in the region” (10, cf. also 159). Koltermann links two points of view in his study. From the perspective of communication studies, he is interested in “the actions of the photoreporter as a communicator within journalistic institutions” (17). He supplements this with questions from peace and conflict science, in particular regarding the “actions of the photoreporter as a social actor within the conflict” (ibid.).

Koltermann’s chosen method is qualitative guided interviews: “The personal accounts of the photoreporters makes the actions of photojournalists accessible for analysis and thus enables the field of photojournalistic production in Israel and the Palestinian territories to be reconstructed” (18). Between September 2011 and April 2012, Koltermann interviewed 40 subjects in Israel and Palestine – 30 men, nine women and a mixed couple of photographers (cf. 179). A standardized questionnaire provided information on aspects such as education, earnings, language skills and social insurance (cf. 179ff.). Koltermann decides against triangulating the results, for example by analyzing images that the respective photojournalist has taken, on the grounds that “questions of representation [are of] less significance” in his study (176, cf. also 416). By examining the production and working conditions of international photojournalists, Koltermann joins the ranks of researchers currently displaying increased interest in these topics (cf. e.g. Gürsel 2016, Vowinckel 2016, Runge 2015, 2016).

Koltermann includes many aspects in his investigation, including the professional socialization of photoreporters (cf. e.g. 184ff.); how they view their role (cf. e.g. 205ff.), including in relation to assistance in conflict situations, for example when people are shot at or killed (cf. 347ff.); the psychosocial and emotional consequences of reporting visually on crises (cf. 377ff.); and the differences in freedom of movement and freedom of the press that the photojournalists experience based on their origins and where they live (cf. 316ff.). Koltermann uses a map he has drawn himself to demonstrate the way the photoreporters move between Israel, the Palestinian territories and Gaza (cf. 317). Working routines in conflict situations are shaped by access to the field (cf. 387ff.), including language skills in Hebrew, Arabic and English, as well as the gender of the photographer, given that gender segregation is “virulent in large parts of the […] societies in Israel and the Palestinian territories” (389).

Koltermann uses his results to develop a “typology of journalistic actors” that presents the working roles of local and international photoreporters, which differ “in terms of their photojournalistic actions and their institutional connections” (403ff.). In this list, the author also includes more recent developments, such as that of the “NGO documentarist” (“documentary photographers that mainly live off commissions for INGOs and NGOs in the fields of humanitarian aid, human rights and development cooperation,” 409), the new activist (“on the cusp of being a citizen journalist,” 407, italics in original) or the socio-documentary activist (“the most political type apart from the ‘news activist’,” 409f.). Koltermann uses the nine categories to extract the different spheres in which the Israeli, Palestinian and international photojournalists are able to act. The international photojournalists are able to move around most freely, while the Israelis have what Koltermann refers to as a medium “regime of movement” and the Palestinians the lowest (413, cf. also 417). It would be a good idea for future research to examine Koltermann’s actor typologies in different locations in order to check whether they still apply and therefore can be used as generalized terms.

Felix Koltermann’s perspective also comes from his wide range of both practical and theoretical experience. Having graduated in both photography and “peace and security studies,” he gained his doctorate in communication studies with this work. He has travelled in Israel and the Palestinian Territories for many years, addresses aspects such as the politicized architecture and landscape in exhibitions of his photography, teaches about the conflict in adult education, and publishes usually smaller works on the topic (e.g. Koltermann 2017). His work reflects his deep familiarity with the region and its actors, benefitting from detailed knowledge of the working conditions of the photojournalists, the political situation and the local incidents that impede their work (cf. 173ff.). Koltermann reflects on his own role as researcher and makes great efforts to ‘pay back’ the knowledge he has gathered on the ground in meetings, lectures and discussions, so as not to come across as “the white researcher, socialized in Europe,” who takes his expertise “back to Germany” (172).

The main weaknesses of the work lie in the way the publication is organized. The book does not have an index – neither for people nor places nor subjects. This is essential for such an extensive and fundamental study. Various sub-chapters have almost identical titles, such as “Psychosocial consequences of conflicts” (102), “Psychosocial consequences” (114) and “The psychosocial consequences of the work” (381); or “Ethics in photojournalism” (80), “Photojournalistic ethics in practice” (340) and “Photojournalistic ethics in conflicts” (396). Some chapters close with a brief summary, while other do not. Apart from a map of the West Bank showing its division into Areas A, B and C in line with the Oslo Accords (cf. 138), the book does not provide any maps of Israel, Jerusalem or Gaza. These would have been a great help to those new to the topic, without personal knowledge of the areas concerned.

Dr. phil. Evelyn Runge conducts research into the production conditions of photojournalists in the digital age (“Image Capture”). She receives funding from the Martin Buber Society of Fellows in the Humanities and Social Sciences (BMBF foundation) and the Harry S. Truman Institute for the Advancement of Peace at the Hebrew University of Jerusalem in Israel. Her research focuses on photography in theory and practice; media sociology; image databases and archives; journalism; and digital storytelling. She studied Political Science, Journalism Studies, Modern German Literature and Sociology at LMU Munich, before training as an editor at the Deutsche Journalistenschule in Munich. Her book Motor/Reise. Handbuch für die Medienpraxis (with Hektor Haarkötter) was published by Herbert von Halem Verlag in 2016. Journalistic work has been published in Frankfurter Allgemeine Sonntagszeitung, Cicero, Die Zeit, and Süddeutsche Zeitung, among others. Dr. Runge is also an alumna of the Junge Akademie at the Berlin-Brandenburg Academy of Sciences and Humanities and the Leopoldina German National Academy of Sciences (member 2011-2016).