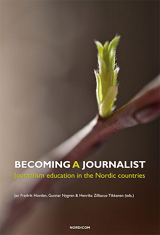 The idea of the ‘Nordic model’ has long been popular in debates on political, economic and social issues in continental Europe, and especially in Germany. There can be no doubt that the societies and political systems of Denmark, Finland, Norway and Sweden have a lot in common politically, culturally and socially.

Given this likeness, it comes as no surprise that clear similarities are also seen in the media systems and the ways journalists are trained in those countries, regardless of the different effects of digitalization, media convergence and globalization. The Digital News Report 2017 (Reuters Institute 2017), for example, documented that people in Norway, Sweden and Denmark are the most willing to pay for online news. The edited volume reviewed here also focuses on the education of journalists in line with an identifiable Nordic model. Tracing back to the Nordic Conference for Journalism Teachers in 2014, the anthology brings together examines key aspects of journalist education, with multiple articles on each.

The first chapter focuses on similarities and emphasizes the Nordic Model in the education of journalists. The second chapter is dedicated to the professional fields and orientations of upcoming journalists at universities and education institutions in each of the Nordic states. The third chapter summarizes the challenges of journalist education, highlighting, for example, the contradiction between the content of education and the demands of the market, promoting women in the professional field, the representation of minorities in editorial offices, and the necessary international orientation. The final chapter addresses practical questions on skill development in view of the challenges presented in newsrooms and by new business models.

The fact that only two of the 27 authors are not involved in academic journalist education can be put down to the academization of journalist education and the volume’s conference origins. When discussing edited volumes or conference publications, it is inevitable that some contributions will be omitted. This review therefore attempts to highlight the aforementioned focus topics without evaluating the individual papers.

The anthology provides extensive insight into journalist education in the Nordic countries. This insight is linked to investigations and discussions in German journalism studies and schools of journalism (cf. for example Altmeppen/Hömberg 2002 or Dernbach/Loosen 2012) and can provide inspiration. Even though few of the papers take an explicitly comparative approach – the inter-Scandinavian comparison in the paper by Jan Fredric Hovden and Rune Ottosen “New Times, New Journalists?” and the comparison of Sweden and Poland by Gunnar Nygren being two examples – it is a useful read. The relevance of the papers that focus only on a single Nordic country is also underscored by the latest developments and discussions on fake news, representation of minorities and dealing with uncertainty and climate change. For their paper “Burdens of Representation,” Gunn Bjørnsen and Anders Graver Knudsen investigated students at Norwegian schools of journalism who are members of ethnic minorities and are confronted with a wide range of expectations from their social and professional environments.

An international approach has long been standard in Scandinavia. Terje Skejerdal and Hans-Olav Hodøl’s paper “Tackling Global Learning in Nordic Journalism Education” examines how this approach and the current global challenges influence journalism education in Norway. They describe how a visit to West Africa, integrated into the curriculum, has especially influenced the careers and expectations of female journalism students.

Also worthy of consideration are the conclusions from the paper by Roy Krøvel, which describes how the perspective of trainee journalists on complex topics changes. Taking the way journalists cover climate change as his case study, he notes that the trainee journalists’ views are initially strongly tied to those of their teachers, before shifting to incorporate those of professional colleagues as their education progresses. Krøvel interprets this as a sign that journalists are required to cover wide fields and thus do not see themselves as skilled enough to deal with complex topics or highly-specialized experts.

One paper makes the interesting and unfortunate finding that, despite the belief that gender equality has long been established in Scandinavia, journalism in Scandinavia – specifically Norway – still displays the same phenomena that have recently been the subject of debate in Germany: Although the majority of those undergoing journalism education are female, the profession remains dominated by men. In her paper “Women Train In- and Out of- Journalism,” Hege Lamark comes to the conclusion that, despite the gender targets, this is still an issue for journalist education.

The question remains of whether a uniform Nordic model exists despite similar challenges facing other Western democracies; and whether journalism and journalist education in the Scandinavian countries can be described as a separate model, in the same way as the ‘Nordic model’ welfare state. The Scandinavian countries are similar in many ways – and their media systems, media policy and media use are no exception. In their investigation of European media systems, Hallin/Mancini (2004) described the Scandinavian countries as a homogeneous group and the ideal example of the democratic-corporatist model. All other European media systems saw the early establishment of a mass press characterized by external pluralism, with the party press playing a significant role. In Scandinavia, on the other hand, ownership is highly concentrated, journalism is highly professionalized and self-regulation institutionalized. Despite this, the states have a strong structural influence on the media system, where press freedom is seen as crucially important. In Sweden, the basis of how the press is understood, the principles of transparency, and the ability to view documents from public bodies and tax authorities is currently creating a conflict with European data protection regulations.

Given these similarities and cultural connections, both the volume’s editors and Elin Gardeström see parallels between the development and current structure of journalist education in the four Nordic states. This usually goes back to local and private business initiatives in the post-war years, most of which were then quickly turned into national, university-based programs. The authors believe that journalist education developed in similar ways in all four countries due to the low language barrier. This enabled those educating journalists to share their approaches – collaboration that was institutionalized as early as the early 1960s. The Nordic countries tend to take a dual approach to education, combining practical and academic content and allowing access for those with fewer academic qualifications. Despite this, the profession is highly academized in Scandinavia.

Media systems, journalism education and media policy face the same challenges in the Nordic states as they do in other Western democracies. As stated by Nord (2008) in relation to the classification of Hallin/Mancini (2004), the Scandinavian countries are no longer ideal specimens of the democratic, corporatist model. In this volume, Arne H. Krumsvik also finds that Norway is moving towards a liberal model, “driven by digitization and commercialization of news media,” although the central measures in media policy “are still grounded in the era of political press” (181). Norway and, especially at the moment, Sweden are attempting to keep up with these developments in the short term with legislative initiatives on platform-independent media promotion (cf. Nordicom 2016). These initiatives demand that 20 percent of the articles have to come from a medium’s own editorial office and that advertising can only account for 40 percent.

Further discussion has been triggered by the idea of tying support to a democracy clause that would exclude racist-oriented print media, which is currently entitled to support. For the long term, Sweden is also planning a digital public service broadcast channel whose 500 journalists would help both to compensate for the reduction in broad-based coverage and to correct fake news. Other media would then be able to use items from this channel free of charge.

The discussions about current media policy and the articles compiled in this volume show that there is much to be gained from examining the Nordic media systems and their journalist education – regardless of whether or not one believes in a distinct Nordic model of journalist education.