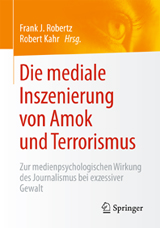 School shootings, terrorism and suicides are all phenomena that center around fatal violence – and in which the media play a crucial role. The question of how the mass media can deal responsibly with this kind of event is therefore of interest from the point of view of both journalism and society as a whole.

Both editors of this interdisciplinary anthology (2016) come from extremely relevant professional backgrounds: Frank J. Robertz heads the Institute for Violence Prevention and Applied Criminology (IGaK) in Berlin, while Robert Kahr is a communication studies expert who teaches operations management for serious criminality at the German Police University. They have put together papers by international authors in order to collate findings that will enable the media to report acts of violence like this in such a way as to minimize suffering, especially of those directly affected.

The editors begin with a chapter on principles, entitled In the beginning was the word. In it, they describe why professional routines make violence an unavoidable topic of journalistic reporting (p. 13-28). Psychological findings are presented on the topics of imitation and self-presentation (p. 29-57) – aspects that are relevant in all three forms of violence.

The same goes for the separate observations of Jens Hoffmann (p. 109-118), Alice Ruddigkeit (p. 137-150) and Michael Kunczik (p. 151-172). Their work on responsible journalism ultimately leads them to similar conclusions: the key aim is to use appropriate reporting to prevent copycat incidents – by not describing the perpetrator, his motives, his approach or the attack in too much detail and by not publishing the name or a picture of the perpetrator, so as not to give him posthumous fame. When it comes to this “immortality through the label of terrorism” (p. 109), Jens Hoffmann sees a link between shootings, terrorist attacks (such as on the French satire magazine Charlie Hebdo and the London underground) and suicides. He argues that it is also important not to demonize the perpetrators in the media, as this also increases their status. Alice Ruddigkeit’s explanations build on this by highlighting the fact that responsible journalism concentrates much more on the victims – including the friends and relatives in some cases (cf. p. 148).

Related to this, Michael Kunczik targets ‘secondary victimization’ (p. 151-172). This term describes how the victim of a violent act – or the victim’s relatives in the case of suicide – can be made to suffer a second time through improper reporting. As the media increasingly take on the perspective of the victim, this view becomes more visible – although this does require great sensitivity on the part of the journalists, as Kunczik emphasizes (p. 166). Although the parallels between the phenomena of shootings, terrorism and suicide are undoubtedly interesting, the anthology does display a certain redundancy here, making it harder to enjoy. As is often the case with works compiled form papers by multiple authors on a single topic, the reader finds himself wishing both that the topics of the various contributions were more clearly distinguishable and that similarities were highlighted more obviously.

The final section of the anthology looks at what professional ethics can take from these findings and, specifically, the question of the role media should take in reporting violent crimes. Firstly, Hans Mathias Kepplinger (p. 173-184) describes how journalists have to weigh up the professional norm of communicating with the public against the social norm of avoiding the negative consequences of reporting. According to him, they usually tend towards the professional norm. Kepplinger talks of the “dominant orientation on the principle of publication” (p. 176), which he claims is due to the fact that, according to a survey he conducted (Kepplinger 2011: 164), journalists often do not believe that their negative reports have unintended negative side-effects (p. 182). This preference for the professional norm is reinforced by journalists’ increasing co-orientation. The next paper is by Frank Nipkau, Managing Editor of the Waiblingen newspaper publisher, which also publishes the Winnender Zeitung. He scrutinizes the principle of publication based on his experience of how the media dealt with the school shooting in Winnenden in 2009 and, in doing so, puts together a set of rules for reporting on such catastrophic events (p. 185-192).

In a concluding chapter (p. 193-203), the editors combine the recommendations once more to produce a twelve-point list. Some of these can be seen as general journalistic guidelines (“Pay attention to choice of words”, “Check sources carefully”, “Do not allow oneself to be instrumentalized”), but gain particular significance in the context of violent crime. They also supplement the other guidelines that are so carefully formed in the book, creating a useful manual for practitioners on how to deal with violent crime.

Journalists always have to balance the interests of different influencing factors: the objects of their reporting (in this case perpetrator and victim), the audience and its justified interests, the sources, society. These all form the basis of professional ethical standards that might contradict economic and social aims. Through its mix of theoretical knowledge and practical experience, this book helps to provide arguments for navigating through the minefield of these intentions.

Dr. Guido Keel is a lecturer at the Institute of Applied Media Studies at Zurich University of Applied Sciences. The focuses of his research include quality in journalism, change in journalism, and journalism in non-European contexts.