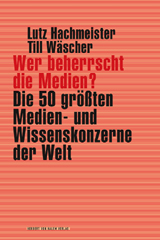 A meta-trend in TIME markets, convergence has now made it into the title of this standard reference work on media structures. While previous editions of Lutz Hachmeister’s compendium still carried the title Die 50 größten Medienkonzerne der Welt [The 50 largest media corporations in the world], he has now shifted his focus to media and knowledge corporations. This may sound like an awkward addition to the title, but it is in fact an almost inevitable admission of an increasingly digitalised economy, in which the boundaries between telecommunications, IT, media, and entertainment are becoming ever more blurred.

The obligatory sales ranking presented by Hachmeister and his new co-author Till Wäscher clearly shows the big losers in this development – the content-driven European media corporations who have lost their dominant position as middlemen between content and audiences. The Bertelsmann Group, for example, was second in the global rankings in 1995; twenty years later, it just manages to edge in at 11th, miles behind the new leader Alphabet. Other German corporations such as ProSiebenSat.1 and Axel Springer do not even make it into the top 50.

The ranking remains at the heart of this third edition, and myriad other features also remain the same, for example the introductory text, well-researched company portraits, and a journalistic style that makes the facts easy to understand even for non-academic readers. The basic structure of the company portraits is also unchanged, with a summary text followed by economic data and an overview of relevant stakeholders in management. Later there are detailed sections on the company’s history and profile, the management, and the various fields in which the company does business. Each portrait ends with an outlook on the latest developments.

This structure gives readers many points of access to the book. Those who are still unaware of the key players in globalized media markets (such as those just beginning their studies) can work through the book from front to back in order to gain an overview of all the trends and players in the global media sector. Advanced readers can still use the book as a reference text, looking up further detail on individual players who are of particular significance in the current business or academic context. Experts will look first at the ranking, searching for patterns in the overall picture formed by the sales trends.

The company portraits reflect the diversity of the media and knowledge industry. Needless to say, the success story of Alphabet alias Google is included. Chinese corporations such as Tencent (a new entry at number 15) and India’s Essel Group (entering the ranking for the first time at number 26) are among those posting remarkable rises. There are even tragicomic stories like that of the geriatric Viacom patron Sumner Redstone (down to seventh from third in 2005), whose daughter is fighting a bitter battle with her father’s much-younger ex-girlfriend over inheritance – a total contrast to the cool efficiency of specialist information corporations like Wolters Kluwer from Amsterdam (a new entry at number 45). All the portraits are written in great detail and with distance and critical perspective, inviting the reader to find out more about the company – or simply move on to the next one in the list.

In the introductory texts, light and shade lie but a hair’s breadth apart. One the one hand, there is a classification of developments in media policy against the background of Donald Trump’s victory in the US presidential election, which was very topical at the time of the book’s publication in January 2017. This provides an outstanding framework in which to reflect on structural changes in the media and knowledge industry. However, this short-term advantage comes at a price: it is based on a political development that has a life of its own. Events that have taken place in the few months of the Trump administration since the book’s publication make it appear already almost out-of-date in places. However, given the refreshingly unorthodox journalistic approach, this is not an inappropriate risk to take in the introduction. After all, the ranking and portraits are no less useful simply because the introduction necessarily remains inextricably linked to a specific time frame in the political dynamics of the United States.

The same cannot be said of the decision to reprint the chapter Die Kulturen der Medienkonzerne from the 2005 edition. Admittedly, this paper does contain passages that are still interesting to read in 2017, such as reflections on film history and the extent to which the American entertainment industry is capable of self-reflection (p. 45). But passages related to specific corporate strategies, such as the way Thomas Middelhoff managed the Bertelsmann Group (p. 51f.) and the phenomenon of the new economy (p. 53), have not stood the test of time. Given the deep-rooted transformation of the media landscape as a result of digitalisation, it would have been better to revise the arguments more fundamentally and to go into more detail on contemporary phenomena such as the sharing economy, big data or the growing significance of social networks.

Leaving aside the question of how the research findings should be evaluated, comparing the two editions from 1995 to today shows what a valuable approach it can be to observe an object over two decades using an identical instrument. The stories of the winners and losers are particularly useful in demonstrating the opportunities and risks of a market whose social and economic significance cannot be underestimated. It would have been fascinating to see more figures from 2005 and 1995 for the companies that already existed then, perhaps in an annex – although this would have added further work to that already involved in the simple-looking tables. Readers can look forward to seeing what has changed by the time the 2025 ranking comes out, when the authors and their researchers will hopefully publish a fourth edition.

This review first appeared in rkm:journal