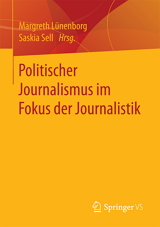 Publishing successful Master’s theses on a common overarching topic in one compact volume is a great idea because it lends visibility to student research in a condensed format. Margreth Lünenborg, journalism professor at Freie Universität Berlin, and Saskia Sell, a research assistant in the same field, did just that by giving twelve young women and three young men the opportunity to showcase their political journalism studies to a broader audience.

In this endeavor, the two editors rely on a broader definition of what is ›political‹, namely »that which constitutes community« (4), »in relation to which journalism is always both observer and actor, describing and participating at the same time« (3). They therefore differentiate this comprehensive political journalism from the more narrowly defined kind of political journalism that focuses on political institutions and politics departments. However, most of the studies in the anthology refer to policymakers, political issues, and journalistic concepts. The novelty is primarily that methods are predominantly qualitative rather than quantitative. The interesting contribution about the glorification and scandalization of Minister of Economics and Defense Karl-Theodor zu Guttenberg (Anne Holbach) reminded me of the book Beziehungsspiele [relationship games], published 25 years earlier, which treated the Späth and Stolpe cases in a similar way (Donsbach et al. 1993).

The volume by Margreth Lünenborg and Saskia Sell contains image analyses of political protests, election campaign reporting in Germany and Israel, and the representation of young women politicians. It examines reporting on China, the environment, migration from Romania and Bulgaria, sexism (Brüderle vs. #aufschrei), and autism. It talks about trust in journalism, data journalism, and exiled journalists who depend on online formats as a mouthpiece. One of the strengths of this volume is that its analyses are not confined to political journalism in Germany, but also establish international references. However, not all contributions are truly interesting; and some of them come to rather trivial findings. I would like to highlight three contributions that offer new insights about fixers, citizen journalists, and user participation.

Sophie Klein examined the role of fixers, stringers, and producers in Israel and the Palestinian territories. These are locals who assist foreign correspondents as »anonymous helpers in foreign journalism«. They are virtually never named in the reports, yet act as organizers, door openers, mediators, translators, and sometimes conduct their own journalistic research and interviews; they also suggest topics. However, the decision on relevance and form of contributions that ultimately get published remains with the correspondents and their editorial offices at home. The author conducted guided interviews with fixers and German television journalists on location in the Middle East. She found that fixers largely see themselves as journalists in their own right and are critical of stereotypes in reporting that focus too much on war and conflict and too little on everyday life. Fixers inject their interests based on their own identity. Ultimately, these findings support conversion theory, according to which the image of a foreign country conveyed in the media contains aspects of both the region on which they report and the home country.

Débora Medeiros elaborates on the difference between citizen journalists and traditional media using the example of a debate on new dams and forest law in Brazil. To this end, she conducted a critical discourse analysis on 440 online texts from two classic magazines (»Época« and »CartaCapital«) and two citizen blogs (»Diário da Verde« and »Blog do Sakamoto«), which are, however, written by authors with journalistic experience. As her analysis reveals, traditional media – with the exception of columnists – tend to cultivate a »discourse of progress«, whereas citizen media cultivate a »discourse of sustainability«. The author is thus able to prove that citizen media produce counter-publics.

Jakob Kienzerle addresses user participation in professional online journalism, leveraging the heuristic model of audience inclusion developed by Wiebke Loosen and Jan-Hinrik Schmidt, which combines systems theory and inclusion theory (Loosen/Schmidt 2012). He explores the hitherto neglected research question how various elements of user participation are presented on websites, arguing that wherever user comments are prominently displayed, they are relevant. Kienzerle therefore proposes to modify the Loosen and Schmidt model to include the presentation of participatory elements as a new analytical dimension.

This review first appeared in rezensionen:kommunikation:medien, July 9, 2018, accessible at https://www.rkm-journal.de/archives/22059

Dr. Roger Blum is Professor Emeritus of Communication and Media Studies at the University of Bern and currently Ombudsman for SRG (Swiss Radio and Television Corporation) in German-speaking Switzerland. His research areas are media systems, political journalism, media ethics, and media history.