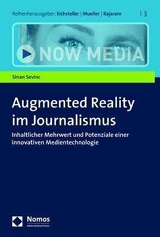 Following its initial boom, augmented reality passed through its trough on the Gartner Hype Cycle in 2018. After the Süddeutsche Zeitung magazine became the first magazine in the world to include additional virtual content in its printed product in 2010, the technology became familiar to the majority of the population through the smartphone game Pokémon GO. Augmented reality is also becoming increasingly important in industry.

In his bachelor’s thesis entitled Augmented Reality im Journalismus. Inhaltlicher Mehrwert und Potenziale einer innovativen Medientechnologie [Augmented reality in journalism. Added value in content and the potential of an innovative media technology], Sinan Sevinc examines the questions of how AR is used specifically in journalism, whether AR products are able to add value here too, and where exactly this added value is to be found. Unlike in virtual reality, the user is not entirely immersed in an artificially created world, but instead receives additional information that is shown within the real environment.

As is usual in a bachelor’s thesis, the author begins by distinguishing the terms ›augmented reality’ and ›virtual reality‹ from one another and describing the historical development. He bases much of this on the excellent standard work Augmented und Mixed Reality für Medien, Marken und Public Relations [Augmented and mixed reality for media, brands and public relations] by Dirk Schart und Nathaly Tschanz. Sinan Sevinc does not yet add anything to the discourse at this point, nor do the practical examples that follow provide any new findings.

When reading this work, it is therefore worth skipping straight to the fourth chapter: the empirical investigation. In May 2017, 20 people volunteered to test applications using the Microsoft AR glasses HoloLens, before completing a questionnaire on their experiences. In advance of the experiment, six indicators – information content, comprehensibility, influence, uniqueness, immersion, and user orientation – were developed to allow content-related added value to be measured for the journalistic content.

According to Sevinc, only 20 of the participants had even heard of augmented reality before the test, although he does not explain whether they merely were not familiar with the term or whether the discussion about Pokémon GO in the mass media the previous year had passed them by entirely. There is also heated discussion in the immersive media community over whether ›augmented reality‹ is really the right term for this content, or whether ›mixed reality‹ would be more accurate. Only four of the participants had used a head-mounted display (the technical term for a virtual or augmented reality headset) before. In AR especially, however, a smartphone is a much more accessible option than a headset anyway.

It is therefore questionable whether the sample size of 20 subjects, 16 of whom had no experience of immersive media at all, is sufficient for an empirical investigation. After all, experience has shown that most users who put on a headset for the first time are impressed by the new experience (and sometimes also disillusioned by the comfort of the headset, whose size is currently still reminiscent of the first cell phones and which are being developed all the time).

Following his analysis, Sinan Sevinc drew the positive conclusion that AR should be used more in journalism, too. »Augmented reality products are able to create content-related added value in a journalistic context on multiple levels, although the technology still needs to address some weak points, especially when it comes to wearing comfort« (79). The test persons particularly reported enhanced understanding and reduced complexity. »Clear added value is also offered by the data on the information content of the form of presentation. The authenticity of the presentation was particularly impressive in this context« (ibid.), continues Sevinc.

A bachelor’s thesis can of course not go into detail about the fact that storytelling using immerse media is just as much in its infancy as the technology itself. In a rapidly developing media segment, the investigation from May 2017 is of course no longer up to date, with the half-life of books about digital journalism generally significantly shorter than that of those about television, radio or print journalism.

The conclusion can therefore only be an abstract one: »To sum up, this bachelor’s thesis has made it clear that AR finds itself in the middle of an ongoing development process that needs to be advanced further through practical work, particularly at a content level« (96). According to the author, this process already indicates enormous potential. »The continuing interest of national and international giants of the sector corroborates this result and clearly shows the significance and the trust that undoubtedly exists in the technology« (ibid.). However, Sevinc does not address an obstacle that could be even more relevant to media companies than the question of journalistic added value: There is still no convincing business model behind AR content for privately-funded media – which is not to say that one could not be developed in the future.

This review first appeared in rezensionen:kommunikation:medien, March 15, 2019, accessible at https://www.rkm-journal.de/archives/21712.

Markus Kaiser is a Professor of Digital Journalism and Media Innovation at Nuremberg Tech.