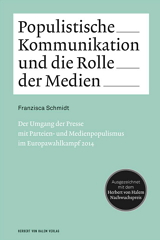 The choice of topic for monographic doctoral projects is a topic in itself. As a book project needs to develop over a period of several years, it should not depend on short-term trends and ›fashion‹ topics. At the same time, the development of attention cycles in society and science can only be predicted to a limited degree. An issue may be considered highly relevant during the planning phase of a project spanning several years, only to have fallen out of focus by the time the work is published. On the other hand, a topic area may also gather pace over the course of the dissertation, without this being obvious from the beginning.

This is what happened to Franzisca Schmidt, whose dissertation, submitted in 2017 and now published, looks at the role of the media in the propagation of populist messages. Populism has become one of the key fields of political communication research in recent years – a development that could not have been predicted five or six years ago. This is both a blessing and a curse for Schmidt’s dissertation. On the one hand, the current attention on populism promises the book a broad and interested reception, as is evidenced by the two prizes it has won. On the other hand, it means that the work now has to assert itself in a highly dynamic field of research that has seen an incredible number of publications recently.

This is not easy for a project with a long-term approach, especially when it comes to reflecting the latest literature. Although the book’s publication date suggests that it is highly up to date, it is important not to measure the book against this standard. The literature-based part of the work (Chapters 2 & 3) maneuvers confidently and intelligently through the basic literature on the topic of populism and the media, yet fails to cover more recent theoretical publications (e.g. Krämer 2018; Waisbord 2018) or the full range of more recent empirical studies. For example, the author repeatedly states that there is an »extensive lack« of internationally comparative content analysis research up to now (22; again: 105) – a claim that is no longer entirely accurate (cf. e.g. Wettstein, Esser, Büchel, et al. 2018; Wettstein, Esser, Schulz, Wirz, & Wirth 2018).

However, given that there are indeed still numerous gaps in the field of research, another content analysis-based study, and one that includes comparison between countries, can only be welcomed. In my view, there is most to be gained by reading this book from the empirical evidence and the findings. In preparing the study, the author does not make any significant attempt to develop her own theory, instead essentially summarizing previous approaches to the interplay between party and media populism and weighing them up against one another in order to produce hypotheses. Extensions are provided in places, such as the explicit integration of the news value approach (often implicitly included in research up to now) (cf. 87-91) or the extremely interesting discussion on the question of the extent to which anti-European positions are per se populistic (cf. 55-64).

The latter question arises predominantly because the study bases the examination of its hypotheses on print reporting and press releases on the 2014 European election in Austria, Germany, France and Greece. The methodological procedure for this input/output analysis is documented in detail and in a way that is transparent for the reader. Anyone who is conducting their own content analysis-based research into populist media messages, or is planning to do so, will be especially interested in the operationalization of populism. Just like many similar studies, the work selects a broad range of access points to this. References to a national (or European) people are generally recorded under the populist sub-dimension of »people reference;« explicit criticism of political elites is considered an »anti-establishment« dimension.

One point of criticism of this solution is the fact that typical elements of politics reporting in the media and of democratic discourse in general are addressed here. It is certainly arguable whether all criticism of political elites that also make reference to ›the people‹ can be considered populist. Unfortunately, the work provides little reflection on alternative ways to measure populism using content analysis. As a result, the advantages and disadvantages of the operationalization selected are not transparent.

The results of this study illustrate that, despite its disadvantages, the option selected is presumably the only possible way to grasp the fragmented appearance of populism in media reporting. Despite the broad approach and the targeted selection of articles that could contain potentially populist statements, only a few populist media messages are identified – a finding that comparable studies share (cf. Wettstein, Esser, Schulz, et al. 2018).

The small sample size makes it much more difficult to test the hypothesis. As the author herself admits, an investigation period longer than the twelve weeks used here would probably have led to more reliable results. Yet the study still uncovers some new and interesting findings, such as the fact that populistic statements from party communication are more likely to be printed when the parties’ political orientation is in line with that of the paper. All in all, however, the study comes to the conclusion that both tabloid and quality newspapers tend to act more as a corrective than a promoter of party populism.

The recent confirmation of these findings once again underscores the idea that researchers looking for the media drivers of populism should focus their attention more on (non-journalistic) social media communication and alternative media. Franzisca Schmidt’s book certainly does not reinvent the wheel of populism research in communication science, but her input/output perspective does contribute an important empirical component. In best Popper style, the book thus helps to consolidate and expand the existing state of knowledge – and that is exactly what empirical social research should do.

This review first appeared in rezensionen:kommunikation:medien, May 29, 2019, accessible at https://www.rkm-journal.de/archives/21851.

Philipp Müller is a Senior Researcher at the University of Mannheim’s Institute for Media and Communication Studies. His work focuses on political communication; the use and effect of journalistic media services; and media transformation and digitalization.