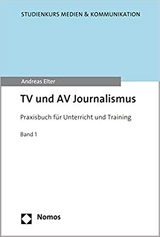 Divided into theory and practice of TV and AV journalism, Andreas Elter’s two-volume work promises to cover the entire spectrum of digital AV journalism. The first volume, which looks at the theory and includes only a few comments on practice in separate, framed paragraphs, has now been published.

In just 330 pages, the author succeeds in covering and briefly presenting all the relevant theories and approaches of recent decades, in each case tailored to the overall goal of the first volume – to create a new »universal model of digital AV journalism« (269). Some of the approaches are presented in a somewhat abbreviated form, which is undoubtedly necessary given the volume’s remit to provide an overview of the theoretical discussions and foundations of media and communication sciences. A brief glance at the bibliography alone shows that not one of the common approaches or discourses has been left out – a considerable achievement.

At the same time, this approach presents a difficulty: On the one hand, the volume is intended to serve as a manual; on the other, the knowledge from the manual is to serve as the basis for developing a new model. This is a tricky tightrope to walk. At the beginning, the author himself admits that he handles the existing theories in rather eclectic fashion – indeed is forced to do so. Yet every­thing that he so cursorily presents does ultimately lead in one direction: towards creating the universal model established at the end of the volume.

This model is a successful attempt to define digital journalism in its forms as TV and AV journalism. Elter hopes that the theory will serve as a set of building blocks that can adapt to the changing conditions in society and technology. After all, as he puts it in the closing definition, »digital AV journalism is communicative action in constantly changing public arenas« (332f). This is undoubtedly a convincing approach.

Despite this, some of the claims he makes in the large theoretical framework need to be scrutinized more closely. For example, the author comes to the conclusion that, due to the different levels of images and text seen in TV journalism, the classic journalistic separation between news and comment cannot be maintained in television (cf. 55). This claim is based on empirical findings: pointed reports in TV magazines, statements providing context in interviews – the spectrum is undoubtedly greater than just news on one side and comment on the other. But the fact that journalists do not always make a clear distinction between news and comment in practice is not in itself a reason to give up on this solid journalistic foundation in TV journalism.

Another aspect is highlighted here as an example. Using the press freedom index, Andreas Elter calculates a journalism probability in various environments and models. He comes to the conclusion that journalism is only possible in a society that is appropriately open: »Normative protection is the oxygen of society that it [journalism] needs to breathe« (320). Although such protection of journalism and corresponding press freedom are undoubtedly more than desirable, this requirement appears difficult given all the journalists who conduct their work against resistance and opposition, often in the most difficult of circumstances.

The entire book is written in very easy to read language, although some of the individual positions are presented in a very brief, sometimes excessively abridged way that makes them appear unnecessarily complex. The author is not afraid to use the first person whenever he presents his own position. But it is doubtful whether, as posited in the foreword, ambitious amateurs or journalism practitioners would pick up this necessarily highly theoretical book. Instead, it will be of great interest to students and teachers who are studying the theoretical background of digital AV journalism and want to gain an overview of the relevant theories and discourses. It fills a gap in journalism studies. The second volume, in which the universal theory posited is to stand up to testing in practice, can be hotly anticipated.

This review first appeared in rezensionen:kommunikation:medien, April 29, 2019, accessible at https://www.rkm-journal.de/archives/21788.

Prof. Dr. Claudia Nothelle has taught TV Journalism at Magdeburg-Stendal University of Applied Sciences, where she is Head of Program for the BA Journalism program, since October 2017. Before this, she worked as a deskman and correspondent at mdr, then as a Chief Television Editor and multimedia Program Director at rbb.