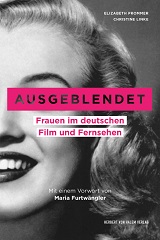 It has become common today for critical journalists to question whether, in order to maintain its own credibility, the media should campaign for greater diversity in the production of news, film and television. As well as a diverse range of people in editorial offices and production teams, it is important to ensure a gender balance between the men and women shown on television and cinema screens. Forty-four years ago, Küchenhoff et al. found gender hierarchization in German television schedules that put women at a considerable disadvantage (Küchenhoff et al. 1975: 250).

Has anything changed since then? The monograph Ausgeblendet. Frauen im deutschen Film und Fernsehen, a study by the Malisa Foundation published by Halem-Verlag, provides some answers. Academics Elizabeth Prommer and Christine Linke from the University of Rostock examined 3,500 hours of television scheduling and 800 movies. On its 181 pages, the book compiles the results of this representative, standardized survey and provides interesting insights into how it was developed and published. The study reveals four key findings: 1. that women are significantly underrepresented; 2. that there is an age gap between men and women of 30 years; 3. that men »explain the world« (Prommer/Linke 2017: 19); and 4. that there is no gender balance even in children’s television (cf. ibid.).

In the foreword, Maria Furtwängler, doctor and actor in the popular German police drama Tatort, explains the background to the study she initiated. Together with her daughter Elisabeth, she has long been involved in protecting women and girls abroad. Awareness that inequality between the genders occurs in Germany, too, led to the foundation of the Malisa Foundation, which is modelled on the Institute on Gender in Media founded by Geena Davis in 2004 and plans to focus on examining »gender presentation in the media in Germany« (10). The Foundation’s motto is »Visible means doable.« It is apparently thanks to Furtwängler that the study received (financial) support from a so-far unique cooperation between public and commercial television stations, although she does write that she was »charging down open doors« with the topic in the sector (11).

The starting hypothesis is first derived scientifically based on familiar basic assumptions such as the cultivation hypothesis, the agenda setting approach, framing theory, Klaus’ understanding of the media as producers of role perceptions and gender images and their consolidation, and finally Mulvey’s assumptions on a three-fold »male gaze,« in which the director, camera and viewer all construct the media image of women through their male point of view. The necessity of the study and the associated book lie in their summary of the status of research and the effort to investigate general »unease« (15) empirically. The objective of the study was to gain representative data in order to provide a »balance of the actual state« (ibid.).

The sophisticated examination of previous research work is divided into television, fiction, information, children’s television, and cinema, and summarizes the most important results of studies and research in an easy-to-understand way. The positive example of Tatort does get a mention here, with 42 percent of the actors playing lead detectives in the ARD show being female (cf. 22). At the end of the chapter, however, the author does note that there is currently a gap in research where representative data on gender presentation in television and cinema in Germany is concerned. Without excessive use of scientific terms, the third chapter outlines the ideologies considered significant in the current discourse – from Judith Butler to binary gender logic and heteronormativity to intersectionality. It ends with a commitment to gender media studies and to the aim of reducing inequality in the media presentation of people, which should no longer regressively impede development towards an equal society. This is all based on valid and reliable data collection (cf. 34).

In the methodological implementation, attention is paid to ensuring a sufficient quantity of data, a random selection of samples, and processes of statistical analysis. In order to answer research questions relating to visibility, age, role and production conditions, the study’s authors selected a standardized content analysis of two artificial weeks from 2016. The sample covered around 77 percent of the television market and, in the full television schedules, 17 channels during the main viewing period of 2 p.m. to midnight; in children’s television, 4 channels from 6 a.m. to 8 p.m.; and, for television movies, a full record of German (co-)productions between 2011 and 2016. Six coders worked on the study for nine months.

A good code book and clear definitions are essential for a quantitative analysis of this size – in this study, for example, the distinction between main and supporting characters or actors was key. In Chapter 4, too, formulations in comprehensible language, clear tables and figures aid understanding of research foundations, definitions of terms, contexts, and the reader’s own enjoyment. Using a good structure, the main section of the book presents the results, which initially relate to television shows (co-)produced in Germany. Not only over the last 25 years, but also across all channels (both public and commercial), little to no change is perceptible in the underrepresentation of women: There are two men on television for every woman. An exception comes in the form of telenovelas and soap operas, where the gender ratio is almost balanced. (Older) women are particularly unlikely to present quiz shows or to provide voiceovers for entertainment shows. Women tend to be a little more present in television fiction, and their representation has become more diverse. Weiderer (1994) counted 35 percent women in fictional programs, while the figure today is 43 percent (38 percent in television series and 44 percent in television movies). Furthermore, women on television are no longer reduced to their relationship status, but are also shown in professional contexts. Unlike on American television, women and men shown on German television are »usually fully clothed and not markedly sexy« (cf. 53). Particularly concerning are the results on age discrimination of women, which have seen little change since Weiderer’s investigation (1993). From their mid-30s, women begin to become less and less visible on screen. The ratio of women to men is 1:3 from age 50 and 1:4 from age 60. In fictional entertainment, the figure is an alarming 1:8. Even in information shows, 80 percent of the main actors aged over 60 are male. Male actors thus have a much wider range of roles available than female actors of that age, who are also paid 22 percent less on average.

Chapter 7 describes another key result of the study: Men explain how the world works. In every genre, in every format and on every channel, it is largely men who guide viewers through the shows as presenters, voiceover artists, showmasters or experts. Differences in relation to gender, role and professional context were recorded. In entertainment shows, 80 percent of presenters are male. Although the gender ratio is relatively balanced in information shows, women suffer from »age invisibility« (Prommer/Linke 2019: 62) here, too. The largest imbalance is seen among experts, eight out of ten of whom are male. Practitioners often seek to justify this by arguing that their policy of inviting a gender balance often comes up against reality, as certain positions are simply largely held by men. Here, too, the authors pose the counterargument that the gender ratio is not adequately reflected: Female legal experts, for example, are seen only around half as often as »in real life« (ibid.: 64). In fictional programming, too, the representation of professional women is far behind reality – with the exception of the many television detectives in crime series. The scope of action and the diversity of roles in German television are thus significantly greater for men.

The results on underrepresentation are even clearer in children’s television, almost 90 percent of which consists of fictional shows. The ratio of female to male characters here is 1:3. The imbalance between female and male characters is particularly striking in the case of imaginary characters – the ratio of female to main animal characters is 1:9. More than half of the shows had no female protagonist at all, while only 16 percent had no male protagonist. The observations on female children’s bodies in particular are also interesting, with the authors describing them as »mostly unnatural, sexualized, and removed from reality« (Prommer/Linke: 92). Half of the main female characters have body shapes that are so thin that they are not in the anatomically possible range. Another 17 percent are extremely thin, although still anatomically possible. Only one third of female characters in children’s television are thus »in the healthy normal range« (ibid.: 95).

The publication’s use of gendered formulations is very positive overall. For example, when Prommer/Linke (ibid.: 44) define a protagonist, they mean men and women equally. In the German original, the generic feminine form is used for the indefinite article. One of the highlights of the publication is the numerous memorable charts and representations of results.

In keeping with the tradition of academic critique of gender studies, criticism could be made of the chosen representation of male and female persons. The same goes for traditional academic categorizations such as »information« and »entertainment.« On a positive note, the language is very comprehensible and the results processed and grouped in a largely logical way. The explanations on publication and PR strategy are also interesting, taking a further critical look in hindsight at the way the study’s findings were reported. Claus Kleber in particular did not emerge well from his interview with Maria Furtwängler in 2017, which was littered with rhetorical questions and anti-feminist bias – although it did attract a certain amount of attention to the issue. The study by Prommer and Linke fills a large gap in the data regarding the representation of women and men in German television and movies. In many other countries, the gap remains.

This review first appeared in rezensionen:kommunikation:medien, December 5, 2019, accessible at https://www.rkm-journal.de/archives/22032

Ingrid Schicker, Bakk.Komm. MA, is employed at the gendup Center for Gender Studies and the Promotion of Women at the University of Salzburg and a research assistant at the Federal Institute for Education Research, Innovation & the Development of Austrian Schools (BIFIE). Her degree thesis was on gender constructions in intersectional contexts in Austrian commercial television. Research focuses: Gender (media) studies and intersectionality.