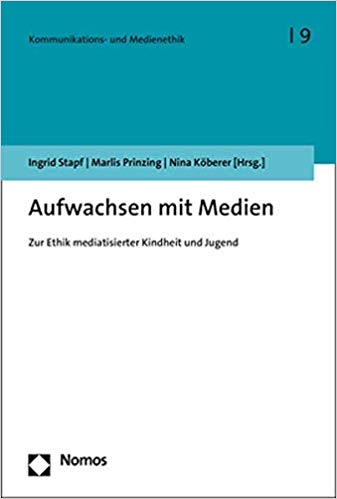 Today, we still find ourselves in the opening stages of digital development. Reflecting on and discussing how children and adolescents grow up with it, in it, and creating it, presents numerous dimensions and aspects – some of which actually do justice to this radical and much cited transformation. There are undoubtedly normative decisions to be made and education questions to resolve – but this needs to be done in as up-to-the-minute a way as possible, which is rarely the case in this book.

The classic, most commonly used definition of media, which is still subtly reminiscent of the technologization of public communication, mass communication and the mass media, i.e. the reception and appropriation of professionally produced content and formally available push devices, is problematic and already eroded. Blanket terms like »childhood« and »adolescence« also appear outdated – famously invented as artifacts of jurisprudence and pedagogy in the 19th and 20th Centuries, they can today only be used in an institutional context. From an empirical and analytical perspective, they need to be differentiated by a diverse range of social, cultural, ethnic and gender-specific factors in today’s pluralistic societies, in which the technical and media-related situation and forces are driving them ever further apart.

Those active in practical education – both parents and professionals – are therefore likely to be able to think of and suffer under numerous requirements and burdens with which they have to deal in relation to digital devices and their use. At times, they may be overwhelmed or left baffled by the challenge. They are unlikely to be helped by the abstracts of so many ethical debates and models on responsibility, normative principles and justifications of media actions, on »ethically informed media education,« on media competence, or even on the basal media-anthropological nature of humanity (cf. M. Rath).

This kind of analysis and (self)reflection in relation to objects and intentions, or at least an introduction thereto, is sadly lacking from the 24 articles (including the introduction) in this work. They originate from an eponymous conference at the Munich School of Philosophy in February 2018, and are also intended to honor the theologian and media ethics expert Rüdiger Funiok, who once taught there, as a »central pioneer of communication and media ethics in the German-speaking world« (14) on the occasion of this 75th birthday and to celebrate the 20th anniversary of the »Netzwerk Medienethik« [Media Ethics Network] that he cofounded.

The reader gains the impression that media ethics has become a rather insular specialist discipline, focused in on itself, that cultivates its own paradigms, approaches and debates in abstract form and debates them self-referentially, only occasionally daring to peer out into social, digital and virtual reality. Various articles in the first section, for example, argue that, with its establishment as a pragmatic, applied area of ethics, the ethics of the audience and recipients has become the focus, rather than the ethics of producers and journalism, as in the past.

There is a marginal, in some ways declamatory attempt to examine the question of whether these categories are even appropriate – what is an audience and what is a recipient? – in an age of shitstorms, malicious tirades, stalking campaigns, filter bubbles, pornographic abuse, personalized advertising, the long-standing blurring of private and public communication, monopolies of international IT corporations, user platformers, blogs, YouTube, Instagram influencers etc., and whether they are adequately perceived and defined by the allegedly active user, whom one hopes to see using his smartphone, tablet, iPad, social media, apps and other platforms in a confident, autonomous, self-determined, responsible, critical and competent way. However, this question is largely ignored in the rest of the arguments. Ethical requirements and tasks for producers and providers are noted only sporadically. The only time they are systematically addressed is in a short section of the introductory article by Funiok, under the brief maxim »Managing customer data transparently and paying taxes – the responsibility of media companies.« It is not enough!

Further irritation comes from formulations that reduce pedagogy to an intervention into everyday actions and, in an objectivizing way, call for media competence to be taught to some extent like abstract, compact knowledge, including an ethical basis ex cathedra. Much reference is made to one of the founders of media competence, Bielefeld-based Dieter Baacke. This is inappropriate given that he originally derived his understanding of competence from the language-based approach of Noam Chomsky and the communicative approach of Jürgen Habermas, both of whom assume that the individual is able to communicate per se and develops further with his development and socialization, as he appropriates the symbolic, technical and media-related world.

Competency must therefore be conceived as both a skill that has always been there and one that develops itself. It is a premise that adults can constantly observe in children from a very young age, as they learn and communicate through their use of digital means of communication. In contrast, other articles take a very generalized look at ethical-normative and pedagogical questions, look for new paradigms in the justification of children’s rights, attitudes or narrative ethics, and address media-related dimensions more or less only as proven fields of contemplation.

The articles are divided into three sections. The first covers »theoretical principles« and contains five articles that discuss the aforementioned premises and posits. Examining »fields of application,« the second and most extensive section includes thirteen articles covering three very different, apparently randomly chosen sectors: »games and entertainment,« »monitoring and welfare,« and »authenticity, reality and virtuality.« Finally, the third section contains three articles with »consequences for society, politics and education.« The second section begins with theory, providing explanations of theories of entertainment and on general ethics of media entertainment. It is considered in principle as »precarious« (111), as it is unable to elude the posit of responsibility. It remains »specifically precarious« (113) for children and young people, resulting in »particular needs for protection and demands for education« (ibid.). This article is supported by a later one, which provides a wander through the history of philosophy and its various perspectives on play and creativity. Before this, digital games, known as »serious games,« are addressed as a medium of learning that can be the subject of little complaint when it comes to ethical questions. They specify the two subsequent articles, which use selected games to look at the potential of digital games for media education and value education. The final article picks up on recent controversy surrounding online gaming addiction, about which the WHO is also concerned, and argues that the criteria are too closely based on pathological gambling and fail to take the player’s social environment sufficiently into account.

China demonstrates the way that digital technologies can be used perfectly and threateningly to control and monitor allegedly dangerous or even just unreliable people in a more large-scale and inhuman way than any other state. In Germany, these uses are applied only in very limited cases and are widely criticized. A detailed explanation of why they are addressed here as a second field of application for media ethics is sorely missed. Instead, the first article complains about the relationship between welfare and monitoring and the potential limits. At the end, it calls for surveillance methods to be »compatible with the context, situation and relationships« (195).

The next article aids this intention with the paradigm of the »leading strings« and once again circles the dual character of control and surveillance. Again taking a theoretical, abstract approach far removed from the topic of the book, the next article examines the development and endangerment of the private sphere in »surveillance societies organized by algorithms« (211). Taking a more specific approach, the next article looks at the dangers facing children and adolescents from IT security and calls for them to be educated as an essential part of the solution, such as in the training offered under Chaos Computer Club e.V.’s initiative »Chaos macht Schule«.

The final section is all about »authenticity, reality and virtuality.« The first article understands this concept as a »challenge of adolescent identity formation in the digital space« (237), as it only permits collective evaluation mechanisms of general categories such as likes, shares, clicks etc. and thus impedes the development of a personal identity. The challenges that influencer and content marketing on social media present for children and adolescents are the subject of the next article, albeit not in a concrete, empirical way, but instead as a problem of media ethics. In contrast, the final article is entirely descriptive, outlining how technologies of extended reality (virtual, augmented, mixed reality) can be used to create learning situations and the »development of a new culture of roles« (269).

The first article in the final section is the first to finally provide a sober introduction to the issues of contemporary education, addressing the »consequences for society, politics and education.« It questions the distinction between digital natives and digital immigrants – originally made by Mark Prensky in 2001 and widely repeated in Germany – and calls for relevant skills and usage habits to be perceived in a more accurate and realistic way. After all, these are not confined to specific generations, nor are they homogeneous throughout specific generations. Diverse concepts, such as mentors on a case-by-case basis, are to be trialed and applied in the Digital Pact between the federal and state governments that is to take effect in 2019.

The next two articles support these pedagogical, didactic objectives: on the one hand, that those responsible should demand and explicate that political education ensures that young people handle the new media being formed and the information it provides both properly and critically, as they can no longer rely on the quality and authenticity of traditional journalism; on the other, that the use of digital media and reflection on its social and normative dimensions be included in teacher training in order to enable authentic participation in its use. A report on a qualitative survey of older adolescents and young adults in the next article supports these attempts in education policy. Finally, the last paper demonstrates that humoristic points of access, such as visual jokes and puns, can also stimulate reflection on media ethics. Problems in media ethics are thus only touched upon in this section.

»Who (person, institution) is responsible for what (action, lack of action) to whom (those affected, shareholders, stakeholders) for what reason (standards and values) before whom (own conscience, public)« (32) – this is the posit that Funiok presented in the introduction as guidelines for justifying and guiding ethically correct action, including in media ethics. There are now plenty of manuals and guides on this topic. If the aim of this volume is to reformulate and spell it out again for children and adolescents at the start of the digital age, it has little success. A lot of relevant points are overlooked or culpably ignored, while other aspects of little expedience are exaggerated and given excessive space. This book does not sufficiently explain or establish what media ethics specifically means, or should mean, in the age of digitalization, the transformation of media and society, and serious maldevelopment in children and adolescents. Current debates indicate a need for something more and something different.

This book review was first published in rezensionen:kommunikation:medien, 24th of June 2019, accessible under https://www.rkm-journal.de/archives/21835.