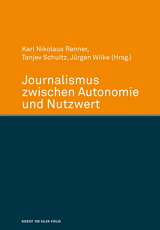 The two key terms of the volume’s title – »autonomy« and »use value« – have gained »a particular topicality« (13) in recent years. The editors are very aware that the focus lies no longer only on the future of journalism in a digitalized world, but increasingly on its fundamental legitimation in society, certainly since New Year 2015/2016. Against this backdrop, the volume is a commemorative publication for the journalism studies expert Volker Wolff, who was Professor of Newspaper and Magazine Journalism at the Department of Journalism, Department of Communication, Johannes Gutenberg University Mainz.

Just as the editors believe Wolff did, the commemorative publication attempts to build bridges between practice and academic study (cf. 14). As well as specialist academic papers, it therefore also includes essays and field reports from journalists and those working in public relations who have a particular connection with Wolff.

The first section concentrates on historical and overarching perspectives (21-184), while the second examines the current challenges facing journalism (185-356). The third part is dedicated to Volker Wolff as a business and finance journalist (357-482) and, last but not least, the fourth section to him as a university lecturer (483-580). The volume thus deliberately brings together very different positions, including »their partial contradictions« (17), as a continued »soliloquy that time is conducting about itself,« as liberal publicist Robert Eduard Prutz described the emerging modern journalism as far back as the mid-19th Century.

We are currently seeing developments that are putting pressure on media freedom in democratic societies from at least two sides: Media corporations like Facebook and Twitter delete suspected fake news accounts with little to no transparency, while the German state of Saxony, from the Prime Minister to the State Office of Criminal Investigations, uses its state power to hinder journalists in their work. In this environment, the article »What is press freedom still worth (to us)« by Christina Holtz-Bacha is especially worth reading (79ff.). Backed up by excellent explanations, Holtz-Bacha reconstructs two semi-topical phenomena in this context: the »Cicero« case from 2005 and the »Netzpolitik.org« case from 2015. In both cases, media freedom in Germany was limited in political and legal terms (the economic and structural limitation of media freedom unfortunately remains a neglected topic, even here). The author notes that recurrent conflicts here are repeatedly fought in the highest courts. This tells her that media freedom cannot be taken for granted, but requires »constant confirmation« (93). In neither the »Cicero« nor the »Netzpolitik.org« case did anyone take to the streets to campaign for media freedom. Holtz-Bacha is rightly concerned that »press freedom« now appears more precarious than it did in the past.

I also consider Tanjev Schultz’ contribution »Nothing is safe« (99ff.) highly relevant given the »challenges in reporting about terrorism.« Like many other experts in journalism studies, Schultz assumes that there is no »generally recognized definition of terrorism« (100). Despite this, he uses the term – which is of course very judgmental – at the object level, not the meta level (i.e. not as a quote with reference to the language use of relevant sources). This is somewhat surprising, and does little justice to the complexity of the problem of attacks and corresponding reporting. To clarify polemically: »terror« and »terrorism« are »of course« always done by »the others« (the bad people, the outsiders etc.).

Unfortunately, Schultz does not appear to be interested in this level of »terror.« He implicitly presupposes this dichotomy and instead discusses the extent to which a »symbiosis« between journalists and attack perpetrators can be assumed to exist. The author rejects this kind of model and notes that, instead, asymmetry prevails: »Terrorists may rely on media, but the reverse does not apply. Journalists do not need terrorists. The mass media does not need terrorist attacks in order to fulfil its function« (101). It is interesting that, in light of such normative formulations, the implicit dichotomy required (»us« against »the terrorists«) can be explicitly reconstructed. This brings us relatively quickly to the limits of the explanatory power of this model. Schultz certainly rejects the »symbiosis« model as simply a »figure of speech« (102) – an argument that does little to convince me.

Schultz writes that he also wants more attention to be paid to the equally thorny relationship between the media and security authorities. Although he at least sees a structural problem in the communication with representatives of authorities (cf. 104), he appears to think little of equidistance, stating that there is no place for gullibility in dealing with representatives of authorities, but also that mistrust leads to its own danger: »the erosion of the fundamental trust in central institutions that is necessary in society« (104). Which society is he talking about here? All societies? All contemporary ones? Even (or indeed especially!) in societies with a democratic political environment, why should skepticism and involvement not be useful instead of the somewhat conservative-sounding »necessary fundamental trust« (see above)? In my view, the author proves too unreflective as an ensemble of the conditions with which he appears familiar.

When it comes to journalistic practice, Schultz proposes »seven important points« for reporting on attacks (cf. 110ff.), which he hopes can also be integrated into degree programs and training (more than they currently are):

Another paper that I found particularly worth reading was the one by Kerstin Liesem: »The suspicion« (119ff.), in which the author examines the fine line between media freedom and protection of privacy. Liesem outlines convincingly why and to what extent journalists bear particular responsibility when reporting on suspected cases. Journalists should not wait until a suspicion has been substantiated, she argues, but can and should actively address processes, even when there is merely a suspicion (or multiple moments of suspicion in various directions) (cf. 128). However, Liesem is rightly careful to note the journalistic duty of care.

Competition within the media landscape has intensified, as has competition between journalists and state power on the one hand and certain groups/classes in society on the other. To be precise, it has been and is being intensified by people. And yet the journalistic duty of care is still important – indeed is becoming even more important in order to (re)gain people’s trust in journalism. The author succeeds in making a convincing case for this specific dialectic between the individual and the collective in a special case. Behind every case of suspicion is at least one person – not only according to Liesem. In the worst case of an incorrect suspicion, this person faces ruin. According to the author, handling this situation with professionalism is a key part of the responsibility journalists bear in society.

These examples are intended to show that the volume contains plenty of food for thought, in many different directions, for both practitioners and theoreticians. The mixture succeeds in demonstrating both the broad-based and in-depth aspects of issues in journalism and journalism studies.

This book review was first published in rezensionen:kommunikation:medien, 21st of September 2018, accessible under https://www.rkm-journal.de/archives/21423.

Dr. Sebastian Köhler, M.A., has been Professor of Journalism and Applied Communication Studies at HMKW University of Applied Sciences for Media, Communication and Management in Berlin since April 2010. He also remains active as a self-employed television producer and online journalist, since 2004 predominanly for the German office of the news agency Reuters in Berlin. Sebastian Köhler can be found on Twitter as @sebkoe