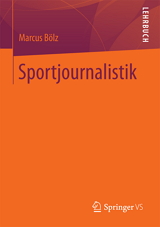 In 2013, Marcus Bölz published a volume on football journalism in Germany. This work in media ethnography gave insight into the way sports journalism in regional newspapers is becoming professionalized and commercialized, given the media transformation, the crisis facing newspapers, and the audience’s fixation on entertainment/football.

The latest volume, Sportjournalistik, sets the bar much higher, looking at the »rules, standards, and working methods of sports journalism« and discussing »what sports journalism gives society and what consequences and effects the reception of sports media triggers in people and society« (XVIII). Bölz thus attempts to bring together sports communication research (specifically the sub-fields of communicator research and editorial office management) and journalism studies, in order to »recognize the interaction between theory and practice in sports journalism« (XVI). The author explains the relevance of this with the following observation: »Sport journalists actually compose the medial reality of the highly-emotional dream world that is sport« (XV). And even more than that: »In a similar way to Christianity in past centuries, sport today has a fascinating power through images, a mythical strength, and a communicative omnipresence« (ibid.).

Although the chapter on theory mentions McLuhan in connection with mediatization (cf. 3), there are no further explanations on the transformation of the public or, especially, medialization (or mediatization). The author misses his opportunity to follow on from the broad, and broadening, base of research on the »medialization of sport.« Referring to Görke, Bölz stresses that the sports media organized in editorial offices synchronize »our society materially, socially, and temporally« (4f.), but in general the depiction of approaches in system theory remains insufficiently complex. The distance from theoretical debates in communication studies is exemplified in a quote: »Many sports journalists ask themselves: ›Do I even need theories for my everyday work in editorial practice?‹« (7) There is a very justified counter-question here: Since when do practitioners decide on the use of theories? Chapter 1 contains very few bibliographical references even for a text book, and uses almost no examples or research findings.

This deficit continues in the subsequent chapters. Focusing on the significance of sports journalism in everyday culture, Chapter 2 looks at economic aspects, for example, and asks the question: »Can a product that is purchased by one’s own business for a lot of money and that may not even be attractive, but instead just a tired kick-about, be described neutrally as a tired kick-about?« (46). The author does not initially provide a clear answer, instead stating rather generally: »Given the intensive products of sports journalism, sports journalists are the cultural and, especially, language communicators of this society« (ibid.).

One of the few passages that does address international research is a reference to Maguire and his definition of »sport as a spectacle.« According to Maguire, sport displays a »test run for society that even today simulates future transnational identities under the banners of profit maximization and world culture and against the background of the dissolution of national identity-seeking processes« (49). The consequences of this assessment are barely addressed.

Chapter 3 reminds the reader that the democratic society calls journalism »the Fourth Estate in a state« (55), without the specifics of sports journalism being related to this (normative) function. The questions of whether sports journalism has a control function to fulfil and, if so, whether it has fulfilled it up to now, remain unanswered. Instead, Bölz shows that Weischenberg’s Onion Model is also useful for explaining the contexts/influencing factors of sports journalism (cf. 66f.). In my view, this aspect should have been given more attention for precisely that reason.

One of the strengths of this book is its examination of pioneering studies into sports communicator research in Germany. Unfortunately, however, there are not enough references to more recent studies on how sports journalists see themselves. The changes that Bölz argues are caused by the »digital media transformation« and can be observed in seven trends, therefore have no clear link to the (current) research into digitalization and sports journalism.

Chapter 4 examines »sports journalism past and present.« Bölz provides a very convincing reappraisal of the history of sports print journalism (cf. 90ff.). In my opinion, sports journalism on the radio (cf. 106ff.) is not given enough attention, while no data at all is provided on sports journalism on television. It would have been possible to take a look at the (high or »highest«) viewing figures, such as those regularly published and discussed in the media perspectives. Instead, there is a quote from (RTL) sports journalist Felix Görner in 1995, in which he states that he »views television particularly critically as a medium of record for sport,« as television makes »the depiction of sport« appear more attractive »than the game itself« (115). Here in particular, it would have been good to address the debate about the »medialization of sport.«

Instead, Bölz uses an insertion to remind readers of the case of Carmen Thomas, the first female sports presenter on »Aktuelles Sportstudio« (ZDF). This case study is particularly topical given the hostility faced by Claudia Neumann during the 2018 soccer World Cup in Russia. In my view, the sub-chapter on the challenges and changes presented by digitalization could have done more to examine the competition between sports journalists and citizen journalism, the way PR by associations and athletes in social media is handled, and the significance of Twitter communication by sports journalists. The reference to Koch’s study on the research activities of sports journalists is not very useful, given that the finding quoted is that, due to digitalization, sport journalists »gain the majority of information from agency or radio reports« (119).

Chapter 5 looks at »sports journalism and its ethical norms.« Bölz takes a two-pronged approach, both drawing on the classic journalism studies sources and working with literature that has little impact in communication sciences. Geil is quoted with an article from Junge Welt (from 2008) in order to depict the magic triangle of sport, media, and business. Another point of criticism is that Bölz takes sports journalism to mean almost exclusively football journalism (cf. e.g. 136). On the other hand, it makes sense for him to address the study by Schaffrath, although there is a lack of reference to critical sports journalism and its institutionalization (key topic: »doping editorial office at ARD«).

Chapter 6 discusses the »quality (of sports journalism).« The author is very successful in applying the Russ-Mohl’s criteria (cf. 150f.). However, I would not necessarily agree with his classification of Schaffrath as a system theoretician (cf. 153). Chapter 7 invokes the connection between »sports journalism and its recipients.« This section provides a series of data and discusses the findings of various studies (such as those by Maar and Schramm). Bölz also addresses the decline in daily newspapers (cf. 192). Chapters 9 and 10 on the management of editorial offices in sport (both in print and television) are particularly worth reading.

In conclusion, Sportjournalistik by Bölz is to be recommended as a book for its target group – students and practitioners. This is not least thanks to the questions at the end of each chapter, which are very useful for checking existing knowledge and progress. The text book makes no contribution to research into sports communication, but this was never its objective.

This book review was first published in rezensionen:kommunikation:medien, 13th of July 2019, accessible under https://www.rkm-journal.de/archives/21323.

Dr. Jörg-Uwe Nieland studied Political Science at the Universities of Duisburg, Bochum and Berlin. He is a member of academic staff at the Department of Communication at the University of Münster. In addition, he is an associate member of the »Media of Cooperation« Collaborative Research Center at the University of Siegen and of the Institute of European Sport Development and Leisure Studies at the German Sport University Cologne. Since 2014, Nieland has been spokesperson and deputy spokesman of the ad-hoc group »Media Sport and Sports Communication« in the German Communication Association; Board Member of Initiative Nachrichtenaufklärung e.V.