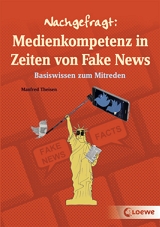 Media literacy is the topic on everyone’s lips. Claims that journalism has descended into a lying press, elections are manipulated by fake news, and smartphone use by children and young people is out of control, have all led to a sense that there is a lack of media literacy, and that this deficit is a danger to society, democracy, and the personal wellbeing of young people.

The Nachgefragt series of books is an easy-to-understand introduction to issues in society for young people, explaining key terms and concepts in a question-and-answer structure. Previous editions have included Politics, Philosophy, Human Rights and Democracy, Refugees and Integration, and World Religions. Having moved on from general topics to more specific and current ones, the series is now tackling media literacy, specifically in the age of fake news.

Although »actually a political scientist,« the author, Manfred Theisen, is familiar with the media from his work as a journalist and deskman. He takes a practical approach to and social interest in the topic, not getting too bogged down in academic theories and findings. Although he does note academic studies in his responses, he does not provide any sources or a bibliography. This seems entirely appropriate for a book that aims to communicate abstract knowledge to young people.

The book is divided into seven chapters. In the first, the author uses 13 questions to explain what media, including social media, actually is. Taking a light, compact and clear approach, he presents basic information on media actors, media content, media use, and media economy. The next two chapters look at the issue of fake news. First, Theisen once again uses concrete questions to explain what fake news is, before going on to explain why fake news exists and how it is used. In doing so, he uses both historical references and current examples.

Chapter 4 looks at populists and how politicians deal with the media, while Chapter 5 focuses on data and data security. Entitled »Welcome to Smartphonia,« Chapter 6 examines the dangers of the online world, in particular internet addiction and filter bubbles. The dangers of cyberbullying and hate speech are tackled separately in the last chapter of the book. In these final two chapters, the book becomes more of a guide for young internet users. It ends with an appendix containing an enormous array of useful links and addresses related to the media, drawing the reader’s attention to further sources and applications on the topic. These tips range from alternatives to the Google search engine and WhatsApp messaging service to addresses and telephone numbers of bodies that can provide advice on cyberbullying.

The aim of the book is to explain apparently complex social and political issues to young people aged 12 and above in way that is easy to understand and relevant to their lives. So does it succeed? Firstly, it is a non-fiction book. That in itself is an obstacle when it comes to the target audience – how many 12-year-olds will voluntarily pick up a book to learn about a social issue? If they do, however, the structure of the book makes it very easy to access information about media literacy. It does not deter its young readers with too many specialist terms, nor does it force them to wade through the entire book. Readers can dip in and out, picking out the questions that interest them: »TV and radio: Why do we have to pay fees?« – »Why are Instagram and WhatsApp so powerful?« – »First aid for cyberbullying: How can you defend yourself?«

Each of the 66 questions, all of which any media user might ask themselves, is given a response of one page, and never more than two. This understandably means that the author has to abbreviate, simplify and sometimes omit details, but this rarely becomes a problem or appears unreliable. There are some imprecise and simplistic statements like »Tabloid newspapers tend to exaggerate and polarize. It is easy for news to become fake news.« (19), but they are few and far between. On the other hand, the book uses simple terms and comparisons to provide definitions that get straight to the heart of the matter.

If there is one area in which this slim little book becomes a little long-winded, it is historical contexts. For example, the author spends eight pages telling the history of fake news, starting from 1274 BC and covering the Roman Empire, the Crusades, Daniel Defoe and his Robinson Crusoe, the October Revolution, Kristallnacht and the invasion of Poland, the Vietnam War, and finally the invasion of Iraq. Compared to the brevity that the author maintains elsewhere, this is a startling level of detail.

Apart from this, the book is extremely up to date and relevant to everyday life. However, the selection of topics and the weight they are given could also be its downfall. Fake news takes up two of the seven chapters and around a quarter of the pages in the main section of the book. But more recent studies indicate that the impact of fake news and filter bubbles may have been exaggerated by specialists in an initial shock reaction and actually play a much more limited role that originally assumed. There are more pressing issues, such as the changing way young people consume media and the potential consequences for coexistence in society and democracy – yet questions such as »What is news?« and »Where does the relevance of information lie – for me and for society?« receive only brief responses in the book.

If young people can be motivated to read this book, they will find a wealth of easy-to-understand information. Even if not, the book provides interested parents and teachers with material to help them talk to young people and reflect with them on how to use smartphones and other media appropriately. It is thus a book about media literacy for young people, for adults who deal with young people, and also for adults themselves. After all, it is they who set the example for children and young people. They are in just as much need of occasionally taking a critical look at their own media consumption and media literacy.

This book review was first published in rezensionen:kommunikation:medien, 26th of March 2019, accessible under https://www.rkm-journal.de/archives/21748.