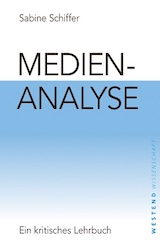 In her textbook Medienanalyse, Sabine Schiffer describes the media-guided construction of meaning and presents media-analytical procedures. The author’s objective was to create a hands-on textbook for daily practice, which means that it ought to be clear and descriptive, and feature practical examples.

The four chapters of the textbook focus on three essential aspects: The first one is the perception of an actively decoding recipient. The author distinguishes between a more supply-oriented and a reception-oriented part. In the supply-oriented part, for example, she discusses agenda setting, wording, and frames. This includes the third chapter, »Recognizing PR Strategies«, which takes a critical look at problematic forms of strategic communication. In the reception-oriented part, she addresses confirmation bias and inductive fallacy, blending it with journalistic presentation conventions and, again, agenda-setting.

The second aspect is media analysis where the author segues from the image-analytical to the text-analytical part. Finally, the third aspect concerns the conditions of media production. The author is particularly critical of the German media system and journalism.

The individual contributions are consistently concise, practical (both supported by examples and presented in a hands-on way), and not overly challenging in terms of theory, methodology, and approach. A book on media analysis is never out of place in times of profound mediatization; Sabine Schiffer’s textbook is certainly original in its combination of a broad scope, as outlined above, and a poignant, always hands-on presentation. As a critical textbook, the reader can expect a consistently objective distance from the senders (especially journalists and PR actors) in Schiffer’s work. The intention is to empower recipients through critical media analysis. In its consistent description of media actors as recipients, however, the book seems somewhat out of date because it omits internet-based communication practices.

The selection of literature listed in the book is quite heterogeneous, ranging from social science classics, to established reference works, to popular science or feuilleton. In the body text, references are rare. While this makes it harder to follow the argumentation intersubjectively, it makes for a better reading flow, which in turn improves general comprehensibility. The author’s practice of listing literature references at the end of each chapter instead of placing each reference directly in the text is somewhat cumbersome.

Schiffer’s theoretical foundation is focused on perceptual psychology, which gives the work an innovative twist. Here, Schiffer remains true to her claim: Nothing will be left out; we are starting from scratch! This approach makes the textbook more appealing, especially considering that most other works in the current crop of introductory books legitimize themselves by highlighting the topics of digitalization and structural change, which have nothing to do with the core subject.

Departing from human perception as point zero does not mean that the book is consistently complete. It is missing too many aspects to be fully comprehensive. Let me just name a few of them: The book does not present the state of research and the theoretical deconstruction of media pedagogical concepts, such as media criticism, media competence, and media literacy – which would have been expected, especially since the first page of the introduction features the following admission: »This is about what is called ›media literacy’ (ML) in English. There is no German term that fully captures the concept of ML.« (9) The reader won’t find a classification of methodologies and/or approaches, nor a reflection of analytical procedures, such as image and content analysis. Furthermore, one would expect to see findings from media effects research in this textbook.

These conspicuous gaps do not necessarily have to be flaws, but could also be interpreted as a deliberate way to reduce complexity. Experts might notice this simplification, but it can help make the textbook more accessible to larger audiences. Thus, I fully agree with the author when she mentions parents and teachers as a target group beyond the scientific context. At the beginning, the author writes that »individual tools [of her media-analytical approach, J.G.] can also be applied in daily media use« (10). Content selection and examples throughout the textbook further its suitability for everyday use.

Sabine Schiffer’s Medienanalyse. Ein kritisches Lehrbuch offers a comprehensible, innovative, and original overview of the meaning and tools of media analysis. The book will satisfy those who are not looking for theoretically, methodologically and/or procedurally profound approaches and arguments, but for concise, albeit selective, insights into media analysis.

Dr. Johannes Gemkow is a research associate at the Chair for Media Literacy and Acquisition Research at the University of Leipzig. He works for the Research Institute for Social Cohesion (FGZ). His work focuses on populism on social media, media literacy, and the sociology of knowledge. 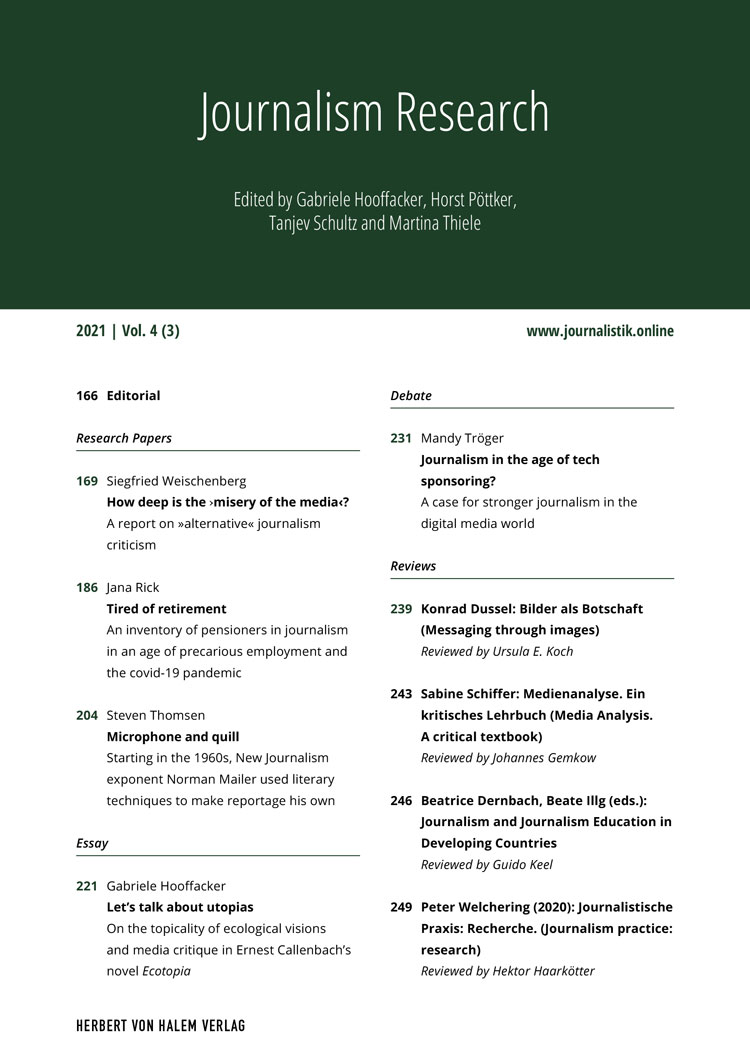