Abstract: Although photojournalistic images have long been an elementary part of journalistic media, communication science has always been guilty of neglecting research into the actors and structures of photojournalism. Addressing this will require the establishment of applied photojournalism research.

Photographic images are now omnipresent, both in print and online journalistic media and on the relevant social media channels. Originating in various contexts, the images can be classified as everything from private amateur photography to stock photographs, advertising, art, and photojournalism. Despite the hype about amateur images and citizen photography, the majority of photographs found in journalistic media and its up-to-the-minute reporting still come from photojournalistic production. We can therefore state that professional photojournalism continues to have a vital impact on up-to-the-minute reporting in the 21st Century.

As the importance of images in public communication has grown, so has the body of academic work on photographic images. Especially since the academic shift towards images, known as the iconic turn or pictorial turn (Mitchell 1994; Maar 2004), count-less research papers have been published both in Germany and internationally. They examine questions as diverse as the photographic representation of individual actors and groupings, their visualization strategies, the emergence of image icons, and the phenomenon of citizen photography, as well as issues in media ontology related to terms like indexicality/iconicity, authenticity, and image action. Such research usually takes as its starting point the published image or individual photographic work complexes, and thus photographic representation.

The interdisciplinary project of visual culture has established itself relatively successfully in Germany over the last twenty years (Sachs-Hombach 2003). Graduate colleges dedicated to photography and documentary methods, such as The photographic dispositif at Braunschweig University of Art and Documentary practice. Excess and privation at Ruhr-University Bochum are part of this tradition.[1] Interdisciplinary formats and approaches are also in vogue among the next generation of young academics, as the Foto: Diskurs network founded in early 2018 shows.[2] In 2017, the degree program Photojournalism and documentary photography at Hannover University of Applied Sciences and Arts created the discourse platform Image Matters, which aims to contribute »issues from photographical image practice and discourses in image and photographic theory to a dialog […] that unlocks significant new perspectives for both sides.«[3]

In contrast, research into the actors and structures of photojournalism remains somewhat neglected in German academia, in both visual culture and communication science. Even in large-scale studies on journalism in Germany, photojournalists are not recorded as a separate professional group (Weischenberg et al. 1993; Weischenberg et al. 2006). The only relevant study – the Bildjournalisten-Enquete (Image Journalist Enquiry) – is from the pre-digital age (Ludwig/Werner 1986).

Even visual communication research, which has predominantly established itself around the Visual Communication Division of the German Communication Association (DGPuK), has provided little assistance, also focusing largely on the photographic image. With a few exceptions (Grittmann/Amman 2008; Koltermann 2017), most of the latest findings on the professional field of photojournalism still come from other disciplines, such as visual history (Vowinckel 2016), studies by professional organizations (Thiemann 2009), or practical manuals (Bauernschmitt/Ebert 2015; Rossig 2014).[4]

Locating photojournalistic training within a discipline

A brief look at other countries is all it takes to show that this is a German phenomenon. In the USA and Denmark, for example, bachelor’s degree programs are located within journalism faculties as a matter of course.[5] Of course this does not in itself prove the existence of applied photojournalism research, but it does say something about the subject and its position. A glance at the English-speaking world is also interesting from a research perspective, revealing the comparatively frequent publication of articles on this topic area in academic journals such as Journalism, Journalism Practice and the Newspaper Research Journal.[6]

The status as a photographer and artist, which is repeatedly ascribed to photojournalists in Germany to this day and is also often part of the way they define themselves, is in part due to the training situation described above and the German understanding of the subject. The fact that photojournalism is forced to legitimize itself almost exclusively through the aesthetic of the image, rather than its journalistic quality, is also down to the discipline in which it is positioned. It is therefore no wonder that issues of aesthetics and visual culture are so important in shaping the way photojournalism and its image worlds are addressed. The attempt to use images to clarify the question of whether we need professional image producers continued for much too long. Instead, the question needs to be answered based on the contribution to society made by photojournalism that uses photographic means to aid society’s self-observation and provides topics for public communication.

In the title of arguably the best-known essay critiquing documentary photography, the American art historian Abigail Solomon-Godeau (2003) asks the question Who speaks like this?. But there are many other questions to add: when, where, how, in what way, with what legitimation and by whom images are created, how and by whom they are distributed, and why and in what context they are published. Essentially this is all about the topic area of image-related (photo)journalistic action. The aim should be to detect power asymmetry and the privileges of individual actors within this framework. The actor configurations that prevail in the system of journalism need to be extracted in order to understand the conditions under which photojournalists and other actors involved with images act. This would demand a radical shift in the way photojournalism is considered and a departure from the fixation on images seen in both practical and academic discourse on journalistic photography. Photo theory, albeit usually inspired by and oriented on aesthetics, is important, but it needs to be enriched with other perspectives in order to aid understanding of the complexity of contemporary photojournalistic practices.

Tackling these challenges will take the development of applied photojournalism research that examines production conditions and routines and feeds its results back into practice. In line with the theory perspective of communication science, this should be dedicated to photojournalism as a subsystem of journalism and part of the system of the formation of mass media statements, analyzing image-related organizations, programs and roles. The ideal location for implementation would seem to be universities which themselves train photojournalists – examples in Germany include Hannover University of Applied Sciences and Arts and Dortmund University of Applied Sciences and Arts. Their outstanding access to publishers and editorial officers would enable them to act as an interface between academia and practice. Unfortunately, however, the history and structure of research at these universities has made it more of a niche activity. As well as a lack of mid-level teaching staff, the high number of teaching hours offered by lecturers undoubtedly plays a role here. Universities are also failing to fill this gap, only rarely looking at photojournalistic practice.

With the subject having become established in Germany in the 1960s, experience from journalism studies could serve as a template for the development of applied photojournalism research. In contrast, experience from the development of the project of interdisciplinary visual culture – both general and specific – is less suitable. The aim of establishing journalism studies as a subject was both to academize journalistic training and to examine the actors, structures, and performance of journalism in an applied, academic way. Academic research at German institutes of journalism studies, such as Dortmund and Leipzig, is conducted in this tradition to this day. Other aspects of theory could be borrowed from organization-related journalism research for the differentiation of photojournalism as a journalistic subsystem (Grittmann 2007) and from visual communication research for a production analysis (Müller/Geise 2015) and the process of image communication (Bock et al. 2010). In order to gain a broader theoretical basis, it would also be useful to take inspiration from the current debate about new theoretical approaches in communication studies.

There are numerous specific questions to research within a photojournalism studies to be established as applied photojournalism research – with regard to production, distribution, and publication. Potential topics are as diverse as investigating the training situation between traineeships and universities in Germany with regard to the methods and curricula used, examining role models and self-definitions to freelance and employed photojournalists, examining photojournalistic practice in local journalism, and clarifying the importance of social media for marketing and career development among photojournalists. The results found would be ideal for a transfer of knowledge between academia and practice, as they are both of interest for an academic understanding of photojournalism and its products and an important resource for the professional field and its self-reflection.

This text is based on a lecture entitled »Actor not image« at the »Images in Conflict«« conference held at Han-nover University of Applied Sciences and Arts in 2017.

Dr. Felix Koltermann (*1979) works as a Postdoc on the study course »Photojournalism and Documentary Photography«. He is a freelance journalist and instructor in adult education. From 2016 to 2019, he was a research associate at the Institute of Media, Drama and Popular Culture at the University of Hildesheim. Following a degree in Photodesign at Dortmund University of Applied Sciences and Arts, he completed his doctorate on international photojournalism in Israel/Palestine at the Media and Communication Studies seminar at the University of Erfurt. His research focuses on international photojournalism, the actions of picture editors, visual media competence, and photobooks.
Contact: felix.koltermann@hs-hannover.de

4 As this text focuses on the German research landscape, research papers from an international context are not covered here.

6 It is a different story in German academic journals such as Publizistik, M&K and the Global Media Journal, making it all the more desirable in the new journal Journalistik. 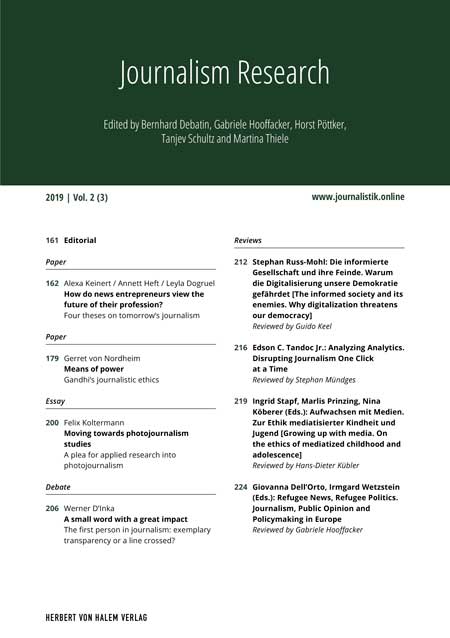